PHOENIX – In response to an elevated fire risk caused by dry conditions, officials announced an indefinite full closure of the Coconino and Kaibab forests starting Wednesday.

The closure for Coconino National Forest will begin at 8 a.m. and remain in effect until the area sees enough rain to reduce the threat, the Forest Service said Monday.

The public won’t be allowed on any part of Coconino National Forest during the closure.

Kaibab National Forest will have similar restrictions, closing Wednesday at 8 a.m. with no public allowed on the forest at any time until the closure is lifted.

The Forest Service is asking all campers already there in both places to leave by Wednesday morning and for anybody making plans for the areas to hold off for at least several weeks.

Individuals caught violating closures or fire restrictions are subject to a fine of up to $5,000 and up to six months in prison, according to the Forest Service.

There were multiple active wildfires burning in Coconino National Forest on Monday, including portions of the Backbone and Rafael fires.

The 2,812-square-mile forest, a popular area for camping, hiking, boating and fishing, has only partially closed in recent years because of wildfire danger, but officials are concerned about resources running low. 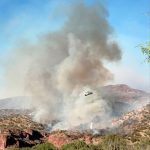 With 540 million people suffering from lower back pain, it remains the leading cause of long-term disability. That’s why World Spine Day on Oct. 16 will raise awareness about spinal health with its theme, BACK2BACK. “BACK2BACK will focus on highlighting ways in which people can help their spines by staying mobile, avoiding physical inactivity, not overloading […]
Close
Coconino, Kaibab forests to close indefinitely while fire risk is high