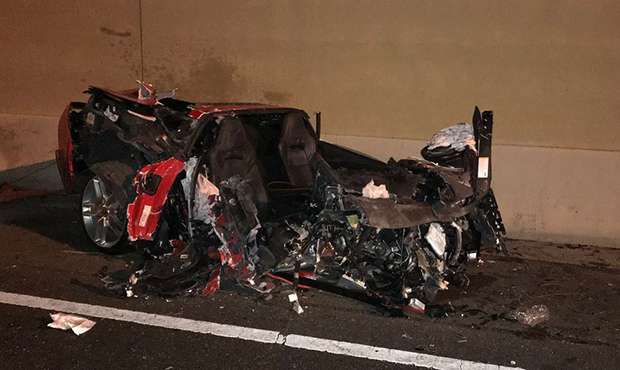 PHOENIX – A wrong-way driver smashed into a police car, then impacted another patrol car on State Route 51 in Phoenix early Monday, sending three people to the hospital.

Northbound lanes were shut down from Interstate 10 eastbound to Indian School Road for hours.

UPDATE: SR 51 NB remains closed at the Mini-Stack. There is no access to NB SR 51 from WB L-202, WB I-10, EB I-10, McDowell, or Thomas.There is no estimated time to reopen the highway. Expect delays and seek alternate routes like I-17 or the L-101 Pima/Price Freeway. #phxtraffic pic.twitter.com/KgZMkwCNAL

Two Tempe police officers were in their cars when a driver in a red Corvette crashed into one unit around 1:50 a.m., according to the Arizona Department of Public Safety.

Pieces of both vehicles slammed into the trailing patrol unit.

The wrong-way driver, a 27-year-old man from Ohio, was taken to the hospital in serious condition but he was expected to recover; the police officers suffered minor injuries.

They had been on their way to work on a missing person’s case when the cars collided.

Wreckage spread across the northbound lanes – the engine wound up on the shoulder of the road – and some landed in southbound lanes.

The freeway was reopened around 6:40 a.m.