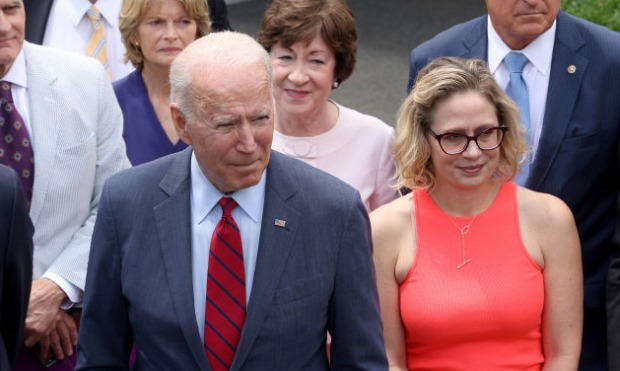 Joining President Joe Biden as part of a group of senators from both parties on Thursday to announce an agreement on a $953 billion infrastructure plan, U.S. Sen. Kyrsten Sinema of Arizona touted the deal as a victory for bipartisanship.

The agreement, reached in a meeting at the White House with five Democratic and five Republican senators, means a breakthrough after arduous negotiations on the president’s top legislative priority.

Sinema, a Democrat, fellow Arizona Democratic Sen. Mark Kelly and 19 other senators reached an agreement on a framework for the plan on Wednesday before bringing it to Biden.

“Nobody got everything they wanted in this package. We gave some to get some,” Sinema said during a press conference. “What we did is put the needs of our country first. This does represent a historic investment in our country’s infrastructure and it meets the needs of folks who live from Virginia out to Arizona.”

We’ve struck a deal. A group of senators – five Democrats and five Republicans – has come together and forged an infrastructure agreement that will create millions of American jobs.

Biden invited Sinema and other members of the bipartisan group to discuss the pared-down plan that has rare broad backing. The senators have struggled over how to pay for the new spending.

Details of the deal were scarce to start, but the plan, with $559 billion in new spending, could open the door to the president’s more sweeping $4 trillion proposals later on.

“There are many who say bipartisanship is dead in Washington D.C. and across this country, but this historic agreement today between Republicans and Democrats in the Senate and with the president of the United States shows that when a group of people who are committed with shared values to solving the problems and challenges our country faces, we can use bipartisanship to solve these problems,” Sinema said.

The agreement comes with a complex legislative push. Pelosi on Thursday welcomed the bipartisan package, but she warned that it must be paired with the president’s bigger goals now being prepared by Congress under a separate so-called the budget reconciliation process.

“This is important,” Pelosi said. “There ain’t going to be a bipartisan bill without a reconciliation bill.”

The Democratic leader vowed the House would not vote on it until the Senate had dealt with both packages.

Biden demanded no new taxes on anyone making less than $400,000, while Republican lawmakers were unwilling to raise taxes beyond such steps as indexing the gasoline tax to inflation. But senators departed for the White House on Thursday with a sense of confidence that funding issues had been addressed.

“We’re still refining the details, but from my perspective, it is paid for,” said Maine Sen. Susan Collins, a Republican and one of 10 lawmakers who met with Biden for roughly 30 minutes.

Republican Bill Cassidy of Louisiana said he was confident the agreement had Biden’s backing.

“We wouldn’t be going there if he wasn’t supportive of the deal,” said Cassidy, adding that the president ”wants to make it flourish.”

Picking which streaming services to subscribe to are difficult choices, and there is no room for internet that cannot handle increased demands.
Close
Sen. Sinema joins Biden to announce bipartisan infrastructure deal