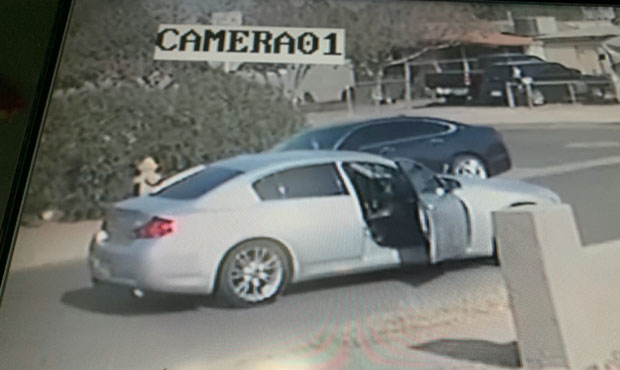 PHOENIX – Authorities issued a Blue Alert on Thursday after a shooting involving an Arizona state trooper in a Phoenix residential area.

One suspect was in custody and another was at-large after the incident near 37th Avenue and Portland Street, Department of Public Safety Director Heston Silbert said during a press conference.

Around 9 a.m., a teenage male got out of a car and fired multiple shots with an AK-47 assault rifle at a DPS detective in a vehicle, who returned fire, Silbert said.

The suspected shooter, identified as 17-year-old Luis German Espinoza Acuna, was taken into custody and the weapon was seized, but the search for the driver, believed to be a Hispanic male in his late teens, continues. No injuries were reported.

“There was no question, it was an ambush,” Silbert said.

The Blue Alert was activated around noon, triggering alarms on cellphones across the Valley. The Blue Alert is a rarely used system that DPS can use when a suspect is on the loose after a law enforcement officer has been assaulted.

Silbert said the issuing of the Blue Alert was meant to happen but was missing key details because of a glitch.

“We’re not sure where that glitch happened,” Silbert said. “We genuinely don’t have the answer yet.”

Silbert says the uniformed troopers were sitting in their parked vehicles in support of a nearby operation when a silver Infiniti pulled directly in front of them and honked.

The troopers fired back, Silbert said, adding that it was too early to know how many shots were exchanged.

DPS released photos of the car involved, a G-37 from model years 2008-13 with custom wheels.

AZDPS detectives seek public assistance locating this vehicle, believed to be a silver 2008-2013 Infinity model G-37 with custom wheels. It has a temporary plate & appears to have chipped paint below the license plate area. If seen, please call 9-1-1 immediately. pic.twitter.com/17xfuEp72S

The car has temporary license plates and might have chipped paint below the plate area.

Anybody with information was asked to call 911.

It was the fourth shooting this year involving DPS troopers, according to KTAR News research. With 540 million people suffering from lower back pain, it remains the leading cause of long-term disability. That’s why World Spine Day on Oct. 16 will raise awareness about spinal health with its theme, BACK2BACK. “BACK2BACK will focus on highlighting ways in which people can help their spines by staying mobile, avoiding physical inactivity, not overloading […]
Close
Blue Alert issued after shooting in Phoenix involving state trooper