PHOENIX — Served up with a dash of history and style, Arizona’s Route 66 license plate was chosen the best of the bunch by a collector’s association.

The Arizona Department of Transportation will celebrate the selection Thursday in a ceremony near the Arizona State Capitol.

“The plate’s visually appealing retro design particularly resonated with our members for its tribute to the legendary Mother Road,” the group’s president, Cyndi McCabe, said in a press release. 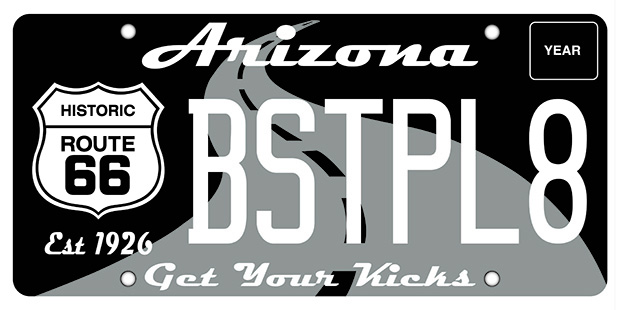 The specialty plate debuted in December. ADOT said it had raised more than $51,000 for preservation of the iconic roadway that was among the first in the U.S. highway system. Route 66 was established in 1926 and became a pop-culture touchstone in music, television, novels and movies.

Starting in Chicago and ending in Santa Monica, California, the 2,448-mile road rolled through northern Arizona for about 400 miles.

From the east, it passes through Holbrook, Winslow, Winona (which gets a shout-out in the hit song “Route 66,”), Flagstaff, Williams and Kingman, among others.

The road was decommissioned in 1985.

“Even though its use as a major highway ended long ago, its ability to be an inspiration endures.”