PHOENIX — The Scottsdale Police Department is seeking the public’s help to identify six suspects in relation to the looting at the Fashion Square mall last year.

The first suspect was described as a 20-30 year old male, who stands between 5-foot-6 to 5-foot-10 inches tall with dark hair. He was last seen wearing a white shirt, tan pants and black shoes.

The second male suspect was described as 20-30 years old, standing at 5-foot-7 to 5-foot-11 with a heavy build and dark hair. He was last seen wearing a black shirt, black hat, gray jeans and white shoes.

A third suspect was described as a female, between 20-30 years old, 5-foot-3 to 5-foot-6 inches tall with dark hair. She was last seen wearing a black top, jean shorts with plaid shirt wrapped around her waist, black sandals and carrying a brown clutch purse.

All three suspects were last seen together in a silver SUV.

Another male suspect was described as around 18-25 years old with dark hair who stands at 5-foot-5 to 5-foot-9. He was last seen wearing a black shirt with white writing, black “LA” hat, gray pants and blue mask.

The final suspect was described as a 5-foot-8 to 6-foot male, approximately 18-25 years old with blond/yellow hair. He was last seen wearing a white long-sleeve shirt, tan pants, black-and-white hat, black-and-white shoes and a purple bandana.

Authorities have arrested 57 people in connection to the May 30, 2020, night of vandalism and have returned over $241,000 worth of merchandise to the businesses, according to a past press release.

Fashion Square closed after the incident and didn’t reopen until June 10, with Urban Outfitters, the Apple Store and Neiman Marcus being among the stores that sustained damage. 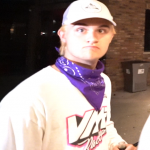 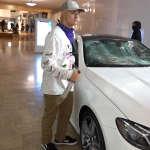