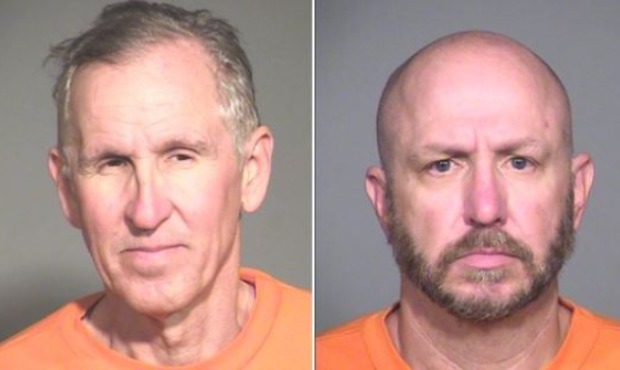 PHOENIX – Authorities are offering rewards of up to $35,000 each for information leading to the capture of two inmates who escaped from an Arizona prison over the weekend.

The Arizona Department of Corrections, Rehabilitation and Reentry said apprehending John Charpiot and David Harmon was its top priority. The fugitives broke out of the Florence state prison on Saturday.

The corrections department is working with the Arizona Department of Public Safety, the U.S. Marshals Service, the Pinal County Sheriff’s Office and the Florence Police Department on the manhunt, Keane said.

DPS Director Heston Silbert said Monday during a press conference that they haven’t received a lot of information regarding the prisoners, leading authorities to believe they could still be near the prison.

“We do have some concerns that they are in fact still in the area,” Silbert said.

Authorities say not to engage the men if you see them because they are considered dangerous. Anybody with information about their whereabouts should immediately call 911 or Silent Witness at 480-WITNESS (948-6377).

Harmon was sentenced to 100 years in prison for kidnapping and second-degree burglary. He was admitted to prison in 2012.

These subjects remain at large. If you see something, say something. Consider them dangerous, do not attempt to engage them on your own. Call 911 immediately. A reward of $35,000 per inmate is available. Anyone with information is asked to call Silent Witness at 480-WITNESS. pic.twitter.com/qYQe2EFEfB

Charpiot, whose prison term started in 2011, was sentenced to 35 years for child molestation and sexual abuse.

Charpiot and Harmon weren’t accounted for during an inmate count Saturday night after being there for an afternoon count.

They broke into a tool shed by knocking down an air conditioning unit and breaking through a wall, according to authorities.

They were able to obtain a bolt cutter, wire snips and other items and used them to cut a fence.

One of the most exciting elements of the MLB offseason is the Arizona Fall League, which began its 30th season Monday.
Close
Manhunt for 2 escaped Arizona inmates continues; reward totals $70K