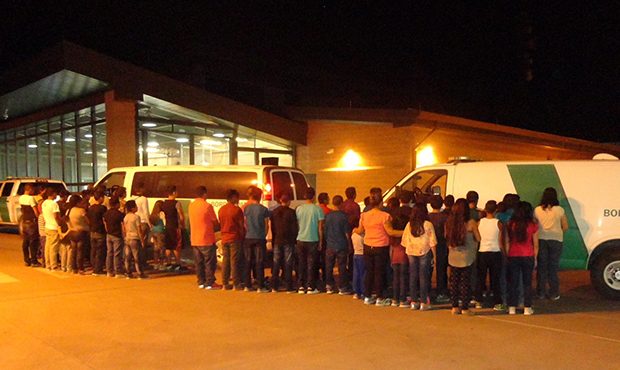 PHOENIX – Border Patrol agents assigned to the Tucson sector located and arrested a large group of illegal aliens seen crossing through the Arizona desert on Friday.

According to a release, agents assigned to the Ajo Station received a call from Sonora, Mexico’s 911 center, which relayed a message from people within the group of aliens requesting assistance.

The members of the group told dispatchers they had crossed the border illegally.

Through the use of agents on the ground and in the air, 57 people were located in the desert west of Lukeville, with some of the group members suffering from distress due to the intense Arizona temperatures.

In total, 21 adults and 36 minors — 17 unaccompanied — were taken into custody by border agents.

According to the release, the group consisted of undocumented aliens from Nicaragua, El Salvador, Guatemala and Honduras.

Many members of the group suffered from dehydration, but only one — a pregnant woman — was transported to a local hospital for further evaluation and treatment.

The rest of the group was transported to the Ajo Station for processing.

Sports betting in Arizona opened a new world to young adults, one where putting down money on games was as easy as sending a text message.
Close
Border agents arrest large group of illegal aliens in southern Arizona