Tens of thousands of students, parents and supporters marching through Jefferson and Washington Streets in #Phoenix to protest gun violence. @KTAR923 pic.twitter.com/vsS9UBEwLV

PHOENIX — Protesters flooded the streets of Phoenix and other Arizona cities as March for Our Lives hit the Valley Saturday.

Thousands of students, parents and gun control advocates across Arizona marched on Saturday as part of a national day of action against gun violence.

“I think today, it sent a message,” 16-year-old Jacob Martinez, who attends Dobson High School said. “We had thousands of people marching, so many people, that when the front of the line was almost back to the capitol, we still had people leaving. That’s how many people there were.

“It really sends a message to the legislative body and to the governor that we’re here to stay.”

Students parents and supporters are now marching through the streets of downtown Phoenix. It’s part of the Phoenix March for Our Lives @KTAR923 pic.twitter.com/eClyT8DpDM

Phoenix is one of several cities across the United States with protesters estimated in the tens of thousands. Organizers of the Phoenix march told KTAR NEWS 92.3 FM’s Griselda Zetino they estimated 25,000 people came out to protest near the State Capitol on Saturday.

We have an estimated crowd count of 15,000. There have not been any arrests or civil disruption incidents at the Capitol today. pic.twitter.com/pQfvOFbFQE

The march began at 10 a.m. with protesters hearing from numerous speakers on gun control.

“Those who complain about our generation forget who raised us” pic.twitter.com/9jy9qqBB6F

“Seeing the speakers and their experiences and the performers and everyone here is like we are on the same page and I feel like that page is overflowed right now and that explains how I’m feeling emotionally as well,” Samantha Lekberg, a Willow Canyon High School student said.

The students organizing Saturday’s march at the Capitol released a list of priorities they believe will help curb gun violence and make schools safer. The list included comprehensive background checks, a ban on bump stocks and $360 million to hire more counselors, psychologists, and social workers.

“I am terrified that my school could be the next and so I want our legislation to change something about gun laws so no other student has to lose their life at school,” 16-year-old Briana Walker, who attends Arcadia High School said.

“We have a very big get out and vote movement,” Martinez said. “We had hundreds of people out just with the sole intention of registering people to vote today. Our goal was 5,000, we’ll see how many that was and we have some more stuff planned until we get what we need to get done in the legislature.”

Similar events were held across the country to protest gun violence in schools and to call for gun control legislation. It was in response to the mass shooting that killed 17 people at Marjory Stoneman Douglas High School in Parkland, Florida, last month. 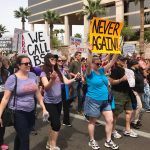 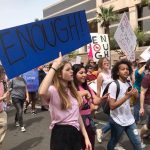 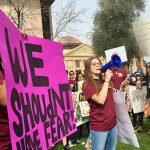 Jace Hyduchak was like most other kids in his kindergarten class: He loved to play basketball, dress up like his favorite superheroes and jump as high as his pint-sized body would take him on his backyard trampoline.
Close
Protesters for March for Our Lives take to the streets of Phoenix