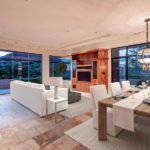 PHOENIX — Arizona Cardinals owner Michael Bidwill is really cleaning house, and not just within the organization.

Bidwill sold his 8,540-square-foot estate in Paradise Valley last month for $5.3 million, according to property records.

The six-bedroom, seven-bathroom home near the Paradise Valley Country Club was listed with an asking price of $5.8 million on Nov. 1, 2022.

The opulent property has views of the Phoenix Mountain Preserve, Mummy Mountain and Camelback Mountain and includes a guest house.

The sale closed on Dec. 27, about two weeks before the Cardinals fired head coach Kliff Kingsbury and announced that general manager Steve Keim would not return after a disappointing 4-13 season.

Bidwill bought the house for $4.425 million in 2007, four years after it was built. He told The Wall Street Journal he used the mansion as his primary residence and held parties and political fundraisers there.

He said he was selling it to move closer to his family.

“It’s a little bit bittersweet, because I love the house and I love the views,” he told the Journal when the property was listed.

Picking which streaming services to subscribe to are difficult choices, and there is no room for internet that cannot handle increased demands.
Close
Cardinals owner Michael Bidwill sells Paradise Valley home for $5.3M