Jake Angeli of Arizona screams "Freedom" inside the Senate chamber after the U.S. Capitol was breached by a mob during a joint session of Congress on Jan. 6, 2021, in Washington, DC. (Photo by Win McNamee/Getty Images)

PHOENIX – Federal prosecutors say the horn-wearing Arizona man who has become a symbol of last week’s insurrection at the U.S. Capitol was among rioters who intended to “capture and assassinate elected officials.”

Jacob Anthony Chansley – aka Jake Angeli or the QAnon Shaman – left a note in the Senate chamber that prosecutors say threatened Vice President Mike Pence, according to a brief filed Thursday in the U.S. District Court for the District of Arizona.

The brief argued that Chansley, 33, shouldn’t be released from custody in Phoenix because he’s a threat to disrupt President-elect Joe Biden’s inauguration next week.

A federal judge ruled in a detention hearing Friday that Chansley be detained pending his trial. He is being transported to Washington D.C. for all future court proceedings, according to the Department of Justice.

“Strong evidence, including Chansley’s own words and actions at the Capitol, supports that the intent of the Capitol rioters was to capture and assassinate elected officials in the United States Government,” the brief says.

But Michael Sherwin, acting U.S. attorney for the District of Columbia, backed away from those claims Friday, saying they have “no direct evidence at this point of kill, capture teams.”

Sherwin said there appears to have been confusion among some prosecutors in part because of the complexity of the investigation and number of people involved. Prosecutors raised a similar prospect Thursday in the case of a former Air Force officer who they alleged carried plastic zip-tie handcuffs because he intended “to take hostages.”

According to the brief on Chansley’s case, he left a note on the Senate dais saying, “it’s only a matter of time, justice is coming,” that prosecutors say was a threat to Pence.

“Although he stated his note was not a threat, the Government strongly disagrees,” the brief says.

Before Chansley and other supporters of President Donald Trump violently overran the Capitol on Jan. 6, Pence had been at the dais officiating congressional ratification of Biden’s Electoral College victory.

Pence and other congressional leaders had been ushered out of the chamber by the Secret Service and U.S. Capitol Police before the rioters stormed into the room.

Chansley posed for photos where Pence had been sitting. According to the brief, Chansley said in a phone call to the FBI on Jan. 7 that “he was glad he sat in the Vice President’s chair because Vice President Pence is a child-trafficking traitor.”

Chansley was indicted by a grand jury on six charges on Jan. 8. He was arrested the next day after he went to the Phoenix FBI office for questioning.

He didn’t know about the warrant for his arrest when he drove to the FBI, according to the brief.

“Chansley had his horns, furry coyote tail headdress, face paint, tan pants, six-foot-long spear, and his bullhorn inside the 2003 Hyundai that he parked at the FBI,” the brief says.

The brief cites Chansley’s mental health, history of drug use and rabid support of the extremist QAnon “imaginary conspiracy theory” among the reasons he would be a danger to society if released.

“Chansley has also previously espoused identifying and then ‘hanging’ ‘traitors’ within the United States government,” the brief says, referencing a screenshot of Nov. 19 social media post by Jake Angeli.

Chansley has long been a highly visible fixture at Trump rallies and various protests in Phoenix.

He told investigators he came to the U.S. Capitol “at the request of the president that all ‘patriots’ come to D.C. on January 6, 2021.”

More than 80 people are facing charges stemming from the violence, including more than 40 people in federal court. The federal charges brought so far are primarily for crimes such as illegal entry but prosecutors have said they are weighing more serious charges against at least some of the rioters.

The FBI has been investigating whether any of the rioters had plots to kidnap members of Congress and hold them hostage, focusing particularly on the men seen carrying plastic zip tie handcuffs and pepper spray.

Prosecutors raised a similar prospect on Friday in the case of a former Air Force officer who they alleged carried plastic zip-tie handcuffs because he intended “to take hostages.” But so far, the Justice Department has not publicly released any specific evidence on the plots or explained how the rioters planned to carry them out. 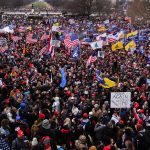