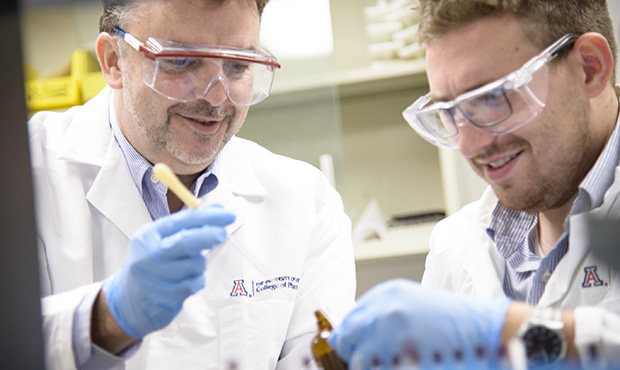 PHOENIX — A University of Arizona scientist has earned $3.8 million in federal funding to further research on medications to help prevent or reverse the progression of Alzheimer’s disease.

Hulme has been studying Alzheimer’s disease since 2012.

The grant allows Dr. Hulme and his team of researchers at the college to continue to develop a treatment to inhibit the activity of certain enzymes in Alzheimer’s patients.

Hulme’s research focuses on multiple areas of the brain in order to combat the disease. Other treatments only address one symptom at a time.

“To date, most Alzheimer’s treatments have focused on addressing only one disease symptom at a time, the most common being the appearance of amyloid plaques, proteins that accumulate in the spaces between nerve cells, which, in a healthy brain, normally are broken down and eliminated,” Hulme said in the release.

“Our unique approach provides an opportunity to intervene in several areas simultaneously by inhibiting the activity of the DYRK1A [dual-specificity tyrosine-phosphorylation-regulated kinase-1A] enzyme,” Hulme said in the release.

Hulme’s preliminary tests have already provided evidence that blocking DYRK1A causes a decrease in the decline of cognitive function and the development of the disease, the program said. Sports betting in Arizona opened a new world to young adults, one where putting down money on games was as easy as sending a text message.
Close
UArizona receives federal grant to further Alzheimer’s research