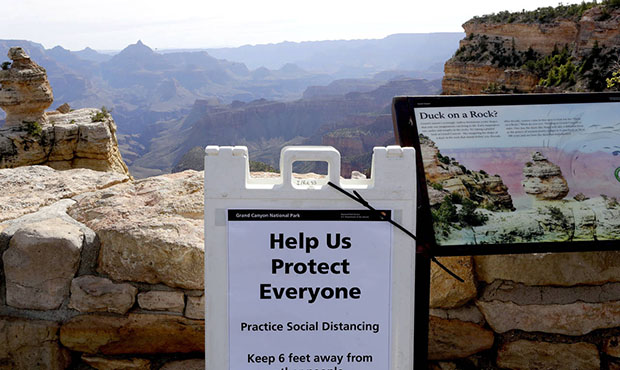 A social distancing sign is seen at the Grand Canyon Friday, May 15, 2020, in Grand Canyon, Ariz. Tourists are once again roaming portions of  Grand Canyon National Park when it partially reopened Friday morning, despite objections that the action could exacerbate the coronavirus pandemic. (AP Photo/Matt York)

“We are disappointed to see that Arizona is reopening,” Nez said Friday in a press release that cited concerns about a possible spike in cases of COVID-19, which has hit the tribe hard.

On Thursday night, Navajo Nation updated its reported total of coronavirus cases to 3,632, with 2,058 being in Arizona.

“Our federal partners need to understand that we have a voice in how these parks impact our communities,” Nez said. “We welcome the economic benefits that tourists bring, but we are also fearful of the potential negative impacts and had hoped that when the Grand Canyon closed on April 1, the park would remain closed until our positive COVID-19 numbers have flattened.”

The National Park Service announced Wednesday that select viewpoints at the South Rim of the Grand Canyon will begin to reopen for limited day use starting Friday. Overnight accommodations remain closed.

The South Rim entrance at the Grand Canyon will allow visitors to enter from Friday to Monday from 6 a.m. to 10 a.m. The park is free to visitors.

By 7:30 a.m. Friday, more than two dozen people were already taking in some of the viewpoints along the South Rim.

The National Park Service says it is working with federal, state and local public health authorities to closely monitor the pandemic and using a phased approach to increase access to its parks.

The Sierra Club also cited the Navajo Nation in its criticism of the reopening. Alicyn Gitlin of the Sierra Club’s Grand Canyon Chapter said it could result in a “patrolling and enforcement nightmare.”

In order to help curb the spread of coronavirus in the community, Navajo Nation extended its state of emergency and the closure of tribal government offices until June 7. 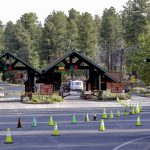 Jace Hyduchak was like most other kids in his kindergarten class: He loved to play basketball, dress up like his favorite superheroes and jump as high as his pint-sized body would take him on his backyard trampoline.
Close
Navajo Nation unhappy about Grand Canyon reopening due to COVID-19 risk