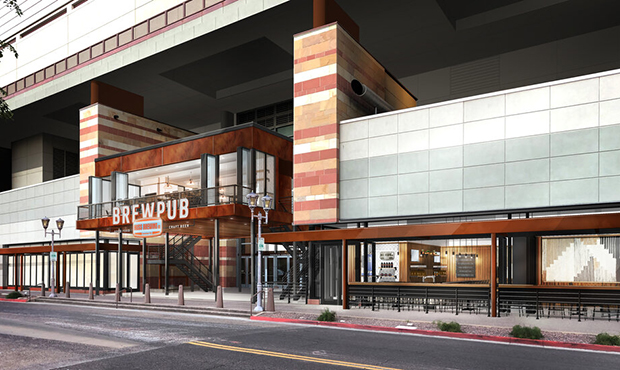 PHOENIX — A Tempe-based brewer has announced plans to open a brewpub in the Phoenix Convention Center later this year.

Huss Brewing Co. will open its taproom and full service restaurant at the downtown convention center in the fall, owners Jeff and Leah Huss announced Tuesday in a press release.

The brewpub will occupy two stories and will be built into the north facade on Monroe Street between Second and Third streets.

“Jeff and I have been working on this project for more than a year and a half,” Leah Huss said in the release. “We’re looking forward to being a part of the downtown Phoenix community and helping the revitalization of the area, especially bringing a vibrant nightlife back to downtown’s sports, arts and events community.”

Huss partnered with the city of Phoenix and Aventura, the convention center’s concession provider, to bring the brewpub to downtown.

The brewery said it will offer several of its beers at the downtown location, including award winners Husstler Milk Stout, Oktoberfest and Copper State IPA.

Huss Brewing Co. opened in Tempe near Priest Drive and Interstate 10 in August 2013. It has a second location in central Phoenix, located at Camelback Road and Central Avenue.

“The Phoenix Convention Center is one of downtown Phoenix’s most visible points of pride, and we are thrilled that they will now house a beloved local company with Huss Brewing Co.,” Phoenix Mayor Kate Gallego said in the release.  “This new location will help further showcase the strength of our community’s craft beer industry to the millions of visitors who come to our city each year.” Are you pregnant? Do you have a friend or loved one who’s expecting?
Close
Huss Brewing to open brewpub in Phoenix Convention Center