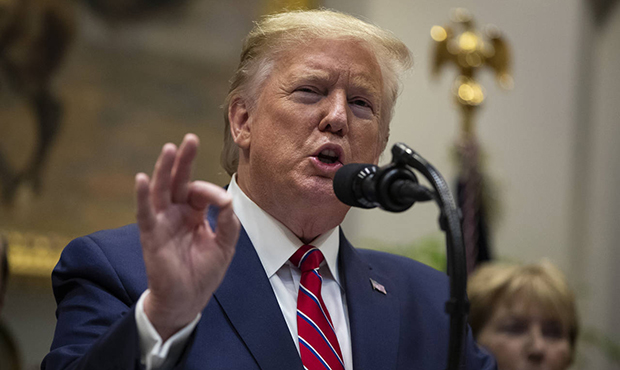 The weight of history has landed, yet again, on America’s shoulders.

This time it’s compliments of the launch by congressional Democrats of formal impeachment hearings against President Trump.

I was 14 when the impeachment inquiry against then-President Richard Nixon kicked off in July 1973. Back then, reality TV amounted to film footage of the daily carnage being wrought by the Vietnam War.

I don’t remember the actual start of the Nixon impeachment inquiry, but I do recall the news in October of that same year that Spiro Agnew, Nixon’s vice president, had resigned.

That actually scared the hell out of me. Maybe because that was when I first understood that Nixon, or any president for that matter, could be removed from office.

My high school history teacher didn’t tell us President Andrew Johnson was impeached in 1868. Plus, I had been raised and “educated” on the myth that U.S. presidents were our protectors and above reproach.

Sorry to break it to you folks, but George Washington didn’t chop down that cherry tree and he never told his dad, “I cannot tell a lie.” His first biographer made that up.

The allegations against Nixon, later confirmed in spades that he really was “a crook”, and his eventual resignation in 1974 taught me that no president, no American, was above the law.

Fast forward to 1998 and the impeachment of President Bill Clinton. By then, I was a working journalist. This time around, the news was hardly shocking. It was Bill Clinton, who was already known as an infamous philanderer. We all knew Clinton did it.

Setting aside the clear abuse of his authority over a White House intern, Clinton’s real crime was that he lied to prosecutors about his affair with her and then tried to get Monica Lewinsky to tell investigators the affair never happened.

Clinton deserved to be impeached, or at least formally censured. Not because he betrayed his wife; that was between Bill and Hillary. The Clinton impeachment was justified because he committed perjury under oath and then tried to obstruct justice by encouraging Monica to cover up their trysts.

Did Clinton deserve to be removed from office? No. I never thought his actions rose to the level of “high crimes and misdemeanors,” the standard articulated in the Constitution. I do, however, wish he had quit. To this day, I’m convinced that the stain of impeachment on the Clinton Administration doomed the 2000 presidential election bid of Vice President Al Gore.

Trump loyalists will no doubt disagree with my blunt assessment of the president. It’s not like they haven’t heard this before. If it’s any consolation, it’s nothing personal. I’ve never met the man. I’m judging him solely on his track record as a candidate and now as president, which, at the risk of sounding Trumpy, proves he is the single worst president in American history.

There’s not enough room here to cover the multitude of reasons why I think this president deserves to be removed from office, but there is one reason that rises above all the rest: Donald J. Trump sold out America.

In my book, and I believe for most Americans, betraying your country is “a high crime and misdemeanor.”

The truth is that Trump started betraying America long before he was elected. His infamous “Russia, if you’re listening…” comment on the campaign trail was an open call to Russia, one of our major adversaries, to hack into the email account of the leading Democratic presidential candidate at the time, Hillary Clinton. Later that day, the Russians tried to do just that, just as they broke into the Democratic Party’s computer servers.

What Trump stands accused of today, which is the focus of the ongoing impeachment hearings, is only his latest betrayal of our country. No, the House of Representatives hasn’t voted yet, but I believe that the evidence presented to date (including the president’s own words) shows a clear pattern of Trump abusing his official authority for personal gain and in direct opposition to U.S. interests.

I’m glad to hear that the Democrats are dropping the Latin “quid pro quo,” because the president’s already extensively documented attempt to pressure the president of Ukraine to investigate former Vice President Joe Biden in exchange for the release of nearly $400 million in military aid – which Ukraine desperately needs to battle Russian troops in Eastern Ukraine – is nothing short of an act of bribery and extortion.

The only difference between the tactics Trump applied in his 2016 campaign and the tactics he’s using today is that this time he got caught.

The “high crime” Trump committed was his willingness to conspire with a foreign power, Ukraine, to attack a political opponent and American democracy itself.

For that, Trump deserves to be impeached by the House, convicted and expelled from office by the Senate and judged harshly by the weight of history.

Maximize your retirement savings with guaranteed fixed rates up to 4.30%. Did you know there is a financial product that can give you great interest rates as you build your retirement savings and provide you with a paycheck for life once you retire? It might sound too good to be true but it is not; this product is called an annuity.
Close
Opinion: The weight of history — and Congress — will judge Trump harshly