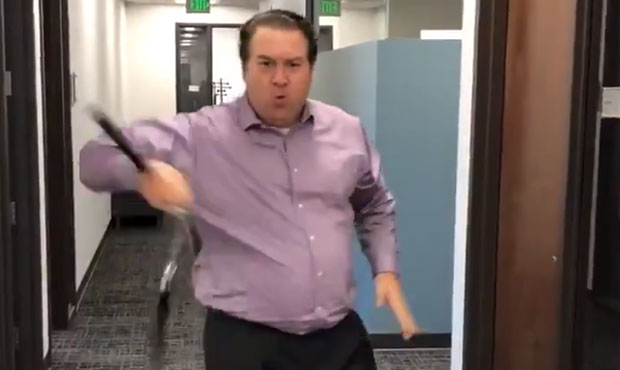 The state’s top prosecutor showed off his prowess with the martial arts weapon in a short video he posted to social media Monday.

Clearly, my years of martial arts training paid off. Pulled my old nunchaku out of storage…like riding a bike. #WayOfTheDragon pic.twitter.com/ibVf9ADWmx

Brnovich seems to know his way around a dojo, as he effortlessly twirls two rods connected by a chain in what appears to be an office hallway.

On Friday, Gov. Doug Ducey signed legislation that removed nunchucks, aka nunchaku, from the state’s list of prohibited weapons, which includes objects such as bombs, gun silencers and automatic firearms.

Prohibited weapons are illegal to make, possess, transport or sell in certain circumstances. Violations can result in felony charges.

Before the change, Arizonans were only allowed to have nunchucks for martial arts training.

Supporters of the bill said those who practice martial arts shouldn’t have to worry they’ll face charges for possessing nunchucks.

Some Twitter users were not amused by Brnovich’s flex, including an Arizona lawmaker.

U.S. Rep. Ruben Gallego shared the video with the caption, “Will nunchucks help defend Arizonans with pre-existing conditions from attacks on their health care coverage?”

“Prior to this video I agreed with the Governor in his support. Now! Clearly the Governor should have vetoed this bill,” he tweeted.

Prior to this video I agreed with the Governor in his support. Now! Clearly the Governor should have vetoed this bill.

Others noted the repeal bill doesn’t take effect until 90 days after the Legislature adjourns, and lawmakers are still in session. That means possessing nunchucks remains a felony carrying a presumptive 2½-year prison term.

Some also noted that weapons are generally banned in public buildings.