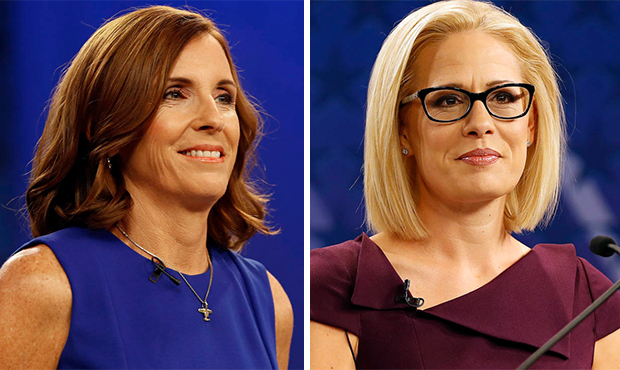 PHOENIX — Both of Arizona’s U.S. senators are asking the Trump administration to reverse a decision to transfer border agents from the state’s ports of entry to cope with the recent surge of migrants.

Sens. Kyrsten Sinema and Martha McSally released a joint statement Tuesday in an effort to keep the Customs and Border Protection officers stationed along the Arizona-Mexico border.

The senators said the officers are needed to maintain the flow of trade, keep illegal drugs and other items from crossing the border and to “help strengthen the morale of CBP’s workforce.”

“We understand the challenges that CBP faces with the recent influx of migrants to our border, and we both look forward to working with you to improve border security,” they wrote.

“However, reducing port staffing harms security and our economy, and different options must be explored.”

Last week, the administration said it would temporarily reassign 750 border inspectors to process migrants by taking their applications for asylum and taking them to holding centers.

The move would mean longer waits at crossings as the busy Easter holiday, but Commissioner Kevin McAleenan said it was necessary to address “an operational crisis.”

If the move were to happen, the senators said the longer wait times at ports would have a “significant negative impact on Arizona’s import of produce and other goods.”

It was not immediately known when the agents would be transferred or when they would return to their regular duties.

Pool renovations and kitchen upgrades may seem enticing, but at the forefront of these investments arguably should be what residents use the most. In a state where summertime is sweltering, access to a functioning HVAC unit can be critical.
Close
Sinema, McSally oppose proposal to transfer Arizona border agents