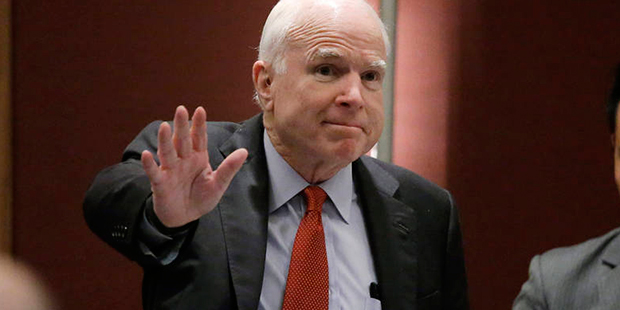 PHOENIX — There are only five days until Election Day, and one poll have given U.S. Sen. John McCain (R-Ariz.) a seemingly insurmountable lead.

The poll from CNN/ORC said McCain leads his rival for the Senate seat, U.S. Rep. Ann Kirkpatrick, by 13 points among both registered and likely voters. He has 54 percent of the support, while Kirkpatrick has 41 percent.

The poll is likely bad news for Kirkpatrick, as another conducted by CNN/ORC in August showed her trailing by the same margin and 86 percent of respondents in the latest poll said they have decided who to vote for.

Despite holding such a large lead, McCain still planned to welcome former Republican presidential nominee Mitt Romney at a rally this week.

The poll was conducted between Oct. 27 and Nov. 1. CNN/ORC contacted 1,005 people — 505 by landline and 500 by cellphone — and, of those, determined 769 were likely voters based on their response to several voting questions.

Among those people, 27 percent described themselves as Democrats, 33 percent as Republicans and 40 percent as independent.

Are you pregnant? Do you have a friend or loved one who’s expecting?
Close
Poll: Five days out from election, Sen. John McCain has big lead in Arizona