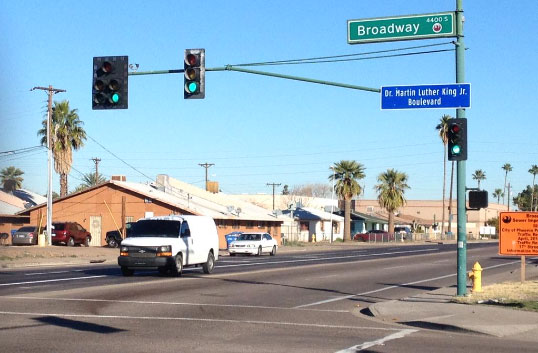 Addressing a crowd at 24th Street and Broadway Road, Mayor Greg Stanton said the gesture ensures that King’s memory and example will be remembered by future generations.

It also puts Phoenix in line with other large cities that have streets named after the slain civil rights leader.

“It is important to note what he did for all of us, not just for African-Americans and the United States of America, but what he did for all Americans, all people of the world, regardless of race, religion, ethnicity, sexual orientation,” Stanton said.

“He fought so that we would protect the values that we as Americans have long espoused.”

The effort, which was led by council members Michael Nowakowski and Kate Gallego, whose districts include Broadway Road, began last year when the two sought a way to honor King.

“We talked about how we do a great job in Phoenix of honoring Dr. King’s legacy during this time of year … but that we needed a regular reminder and that we ought to join our other cities in having a street named after him,” Gallego said.

A committee created to head the project chose Broadway Road because much of Phoenix’s civil rights history occurred in the neighborhoods along it.

Because the name is ceremonial, the official name of the street itself hasn’t changed. But Gallego and her district’s African American Advisory Council will begin the process of officially changing the street’s name that could take years, said Michael Kelly, chairman of the council.

“It’s been over 30 years in coming,” he said. “A number of community leaders … have had the idea to do a naming of a major street for Martin Luther King, but this is the first time that a concerted effort with all of the community to actually make it happen has come together.”

In addition to speeches from community leaders, the unveiling ceremony featured a song, letter to King, poem and dance from students.

Viola Demery, 92, said that the street’s naming carries special meaning to her because she lived through the civil rights movement and has seen the impact King made on her community.

“It meant a lot to all of us to know that we had a man who would stand up and speak out for us,” she said.

Demery said that young people should continue to build on the progress that King made.

Demery’s daughter, Willie Mae Crosby, 68, said that while there have been many improvements in race relations since King’s time, there is still a long way to go.

“It’s going to take a while,” said Crosby, who participated in marches and protests in Phoenix during the civil rights movement.

“It’s going to take everybody’s effort in order to get rid of discrimination, but it’s still there. You see it every day. Until we get that done, we still have work to do.”

Maximize your retirement savings with guaranteed fixed rates up to 4.30%. Did you know there is a financial product that can give you great interest rates as you build your retirement savings and provide you with a paycheck for life once you retire? It might sound too good to be true but it is not; this product is called an annuity.
Close
Phoenix officials add Dr. Martin Luther King Jr. Boulevard sign to Broadway Road