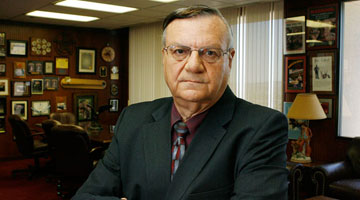 PHOENIX — Maricopa County Sheriff Joe Arpaio announced Thursday he would not run for Arizona governor in the upcoming election.

“I cannot in good conscience leave the sheriff’s office now, since that would be necessary if I declare a candidacy for governor,” Arpaio said in a press release. “Currently, I have several sensitive investigations in progress and am facing many challenges in my office. Because of this, I will not desert the people of Maricopa County who have elected me six times. Further, I cannot desert my dedicated employees.”

Despite not running, Arpaio said he would have been a shoe-in for governor if his name ever appeared on the ballot.

The announcement does not signify the end of Arpaio’s political career.

“As I mentioned the night of my re-election in 2012, I stated that I would run again for sheriff in 2016,” he said. “So many have already supported my campaign for another term, having already raised over $4.2 million in the last 16 months.”

In late December, Arpaio’s office was found guilty of racial profiling against Latinos since 2007. Jace Hyduchak was like most other kids in his kindergarten class: He loved to play basketball, dress up like his favorite superheroes and jump as high as his pint-sized body would take him on his backyard trampoline.
Close
Sheriff Joe Arpaio: I’m not running for Arizona governor