Overall, 48% had an unfavorable view of Sinema, while 39% said they had a favorable view of her. The numbers are tied to the senator’s vote against ending the filibuster, which in turn shut down passage of the Democrats’ voting rights bill in January.

“Kyrsten Sinema is becoming especially unpopular with groups that, on paper, look just like her: suburban women, white voters, Democrats and even Arizona independents,” Mike Noble, chief researcher for the Phoenix pollsters, said in a press release. 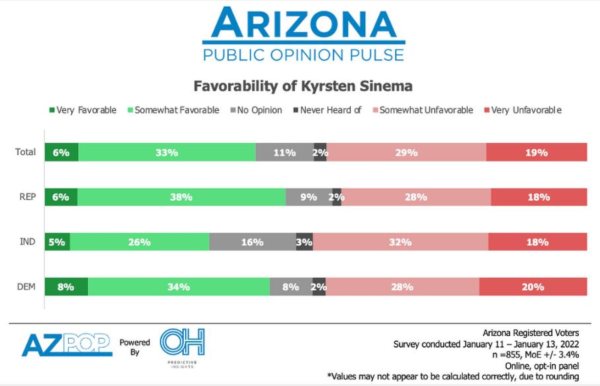 Sinema’s seat doesn’t come up for election until August 2024.

She was censured by the Arizona Democratic Party last month for “her failure to do whatever it takes to ensure the health of our democracy”, meaning her breaking from the party on the filibuster rule vote.