Another company involved in semiconductor production comes to Phoenix

PHOENIX – A Taiwanese company that supplies chemicals used in the production of semiconductors broke ground on its first U.S. manufacturing facility in north Phoenix on Thursday.

The company is expected to invest $100 million in the project in two phases, the first part being operational by early next year, according to a press release from the Arizona Commerce Authority.

“This new facility enables Sunlit to be the leading main supplier of high purity hydrofluoric acid to semiconductor fabs in the U.S.,” Bryan Lin, the company’s president, said in the release.

“We are also equally committed to allocating considerable resources and to bring along the know-how in adhering to the highest standards of environmental and safety management, water efficiency and energy management.”

The Sunlit location is about 10 miles from the massive Taiwan Semiconductor Manufacturing Company project being built near Loop 303 at the 43rd Avenue alignment.

The presence of TSMC, the world’s largest semiconductor foundry, is helping metro Phoenix transform into a major player in the chipmaking industry.

“Phoenix welcomes Sunlit Chemical from Taiwan, the first in a series of foreign companies investing here as a result of TSMC,” Phoenix Mayor Kate Gallego said in the release.

“Sunlit’s decision is a testament to Phoenix’s advancement as a national and global leader in the semiconductor industry.”

Last week, EMD Electronics, a company that makes materials for semiconductors, announced plans for a factory in Chandler.

“Sunlit’s investment bolsters Arizona’s semiconductor supply chain and our reputation as a global semiconductor powerhouse,” Arizona Gov. Doug Ducey, who was at Thursday’s groundbreaking, said in the release. 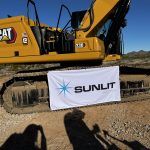