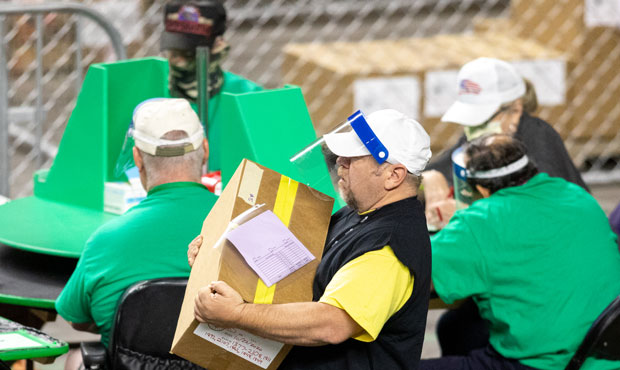 PHOENIX – At least one member of the Maricopa County Board of Supervisors is refusing to attend a meeting requested by the Arizona Senate about the ongoing election audit.

“I absolutely am not going to come down on Tuesday,” Clint Hickman, one of the five-member board’s four Republicans, told KTAR News 92.3 FM’s The Mike Broomhead Show on Friday. “I feel it more important to speak out on Monday.”

Hickman said he can’t speak for his fellow board members, and a county spokesman told KTAR News that none of the other supervisors have made decisions publicly about whether to attend the livestreamed Senate meeting.

On Wednesday, Arizona Senate President Karen Fann invited board members and elections officials to meet at the Arizona Capitol on Tuesday at 1 p.m. to address several issues related to the audit she ordered after winning a legal battle for access to voting equipment and nearly 2.1 million ballots from the county’s November 2020 election.

The Republican state senator’s letter proposing the meeting lays out concerns about compliance with subpoenas, chain of custody and ballot storage, and alleged database deletions as raised by the firms hired to conduct the audit, which is being led by Cyber Ninjas.

Board Chairman Jack Sellers responded Thursday with a tersely worded statement calling the allegations, some of which were made on the audit’s official Twitter account, “false and ill-informed.”

Chairman @jacksellers responds to "false and ill-informed" allegations from Arizona Senate and Senate audit account. "It's clearer by the day the people hired by the Senate are in way over their heads." Full statement below: pic.twitter.com/kBkVKgbEcD

“The claim that our employees deleted election field and destroyed evidence is outrageous, completely baseless and beneath the dignity of the Arizona Senate,” Sellers wrote.

“I demand an immediate retraction of any public statements made to the news media and spread via Twitter.”

Sellers went on to say the board will hold its own public meeting on Monday “to refute lies and lay out facts about these issues.”

Hickman said the questions in Fann’s letter will be addressed then, based on the findings of full-time forensic investigators employed by county agencies.

“And this is answering questions that we don’t even know what they’re seeing,” he said. “We were told that this audit — again in quotes — this audit
would be filed, be run, and then they would offer a report back to Karen Fann.

“I’m of the persuasion we cannot answer things based on Twitter accounts. It doesn’t make any of us look good, so we’ll go ahead and answer whatever material we have found out.”

Hickman noted that he and other county officials spent hours at a Senate hearing in December addressing concerns about the election, but that didn’t satisfy Fann.

“We spent 5½ hours’ worth of our lives there, only to see a committee vote … to subpoena our board … to go down all sorts of quite possibly rabbit holes,” Hickman said.

In an interview with The Mike Broomhead Show on Friday morning before Hickman’s appearance, Fann said the meeting invitation was an alternative to submitting another subpoena.

“We met and said, you know what, let’s not [issue a subpoena]. We don’t need to be hostile or appear that way,” she said. “Let’s just write him a letter, let them know what the questions we have, have them come in on Tuesday and answer those questions.

Fann said the contracted auditors told her a section of the database had been deleted.

“And I will admit I am no expert in this field, so I’m only relaying what they what they said,” she said.

“The problem with what this tweet did and what they basically accused the Board of Supervisors and the elections department, is they didn’t give a lot of information,” said Archer, who used to work for the Arizona Secretary of State’s Office.

“So they gave us just enough information to make it look like the board did something intentional, but they didn’t give us anything really with any real clarity.”

The audit is taking a break starting Friday because of previously scheduled high school graduation ceremonies at Arizona Veterans Memorial Coliseum, where the ballots were being counted and equipment examined. The audit is set to resume May 24.

The Maricopa County Attorney's Office said it is reviewing recommended charges submitted against activists who confronted U.S. Sen. Kyrsten Sinema in a bathroom two weeks ago.

Nearly two out of every three children in low-income communities don’t own a single children’s book, a fact that ultimately could have profound impacts even before entering kindergarten, according to Arizona nonprofit Southwest Human Development.
Close
At least 1 county official rejects Arizona Senate’s election audit meeting request