The rights and privileges of a face mask order 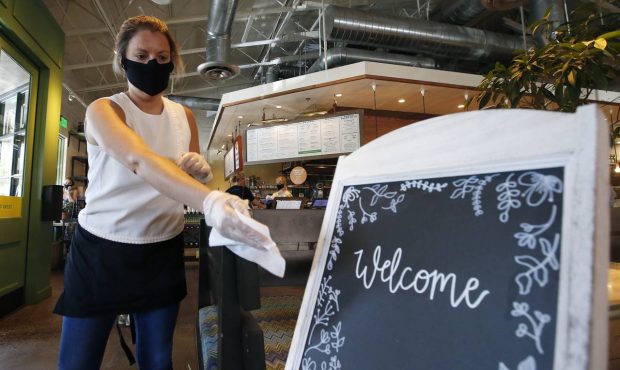 Laura Spencer, a recruiter at the corporate offices of the Fox Restaurant Concepts' Phoenix-based eateries, cleans off surfaces as she helps out at Flower Child restaurant as the restaurant is just one of the gradually opening full service dine-in establishments, expanding from their takeout option, to reopen as Arizona slowly relaxes restrictions due to the coronavirus, Monday, May 11, 2020, in Phoenix. (AP Photo/Ross D. Franklin)

During Thursday’s press conference, Gov. Doug Ducey acknowledged that an increase in confirmed coronavirus cases, a higher percentage of positive tests for the virus and increased hospitalization has Arizona headed in a negative direction.

But when asked by a reporter if that negative direction meant going back to a closure of the state, the governor replied, “It’s not under discussion.”

Thank you, Governor. Lockdowns test negative for our economy and my family’s future.

But should Ducey consider doing something?! And a particular something he could learn about at a Valley high school?

When Ducey said at his press conference, “If you can’t physically distance, wear the mask,” he was suggesting we wear masks. But should he follow the lead of Brophy College Prep and require everyone to wear a mask?

I don’t think we are to that point yet, but wouldn’t you rather be required to wear a face mask than face another stay-at-home order and more failed businesses and unemployment?

I don’t like doing so, but I’ve been wearing a mask in public places where social distancing is virtually impossible. However, I don’t think the government should, or even legally can, tell me that I have to do so because I believe in individual rights.

But what if a mask-wearing requirement didn’t trample individual rights – and was, instead, a requirement for an organization to keep a privilege?

Business licenses are considered a privilege, and it’s constitutional to take away a company’s business license when they act in a reckless fashion, show disregard for others’ safety or allow (hmm…) unhealthy conditions to occur in a business.

Hey – I don’t like forcing masks on individuals or businesses, but if I have to choose, the latter is the lesser evil.

But this suggestion is probably falling on deaf ears. And here’s why a business mask requirement will never be “under discussion” in the Governor’s Office:

Even though Republicans say that, when it comes to government, they prefer local control, there are just too many Democrats in control of those local governments.

Quantum Fiber supplies unlimited data with speeds up to 940 mbps, enough to share 4K videos with coworkers 20 times faster than a cable.
Close
The rights and privileges of a face mask order