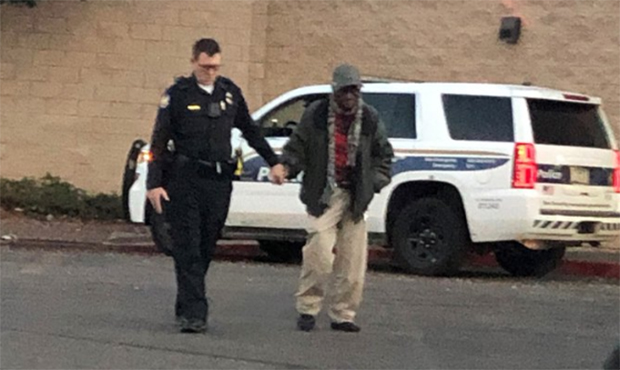 PHOENIX — A grainy photo taken from a distance delivered a powerful message on social media after an observant citizen watched a Phoenix police officer hold the hand of an elderly man outside of Desert Sky Mall.

“I saw the man in the rearview mirror of my patrol car while in the parking lot and he approached the window looking for help,” Officer Joseph Mayfield told KTAR News 92.3 FM on Tuesday. “He was afraid if he walked too fast he would fall.”

That’s when the 19-year veteran of the Phoenix Police Department took the older gentleman by the hand and helped him get to where he needed to be inside the mall.

A citizen saw the whole thing unfold and posted the photo on her Instagram with a caption saying, “Thank you for all you do.”

In the moment, Mayfield did not know his picture had been taken and posted to social media. But now that is has been shared on Facebook close to 1,000 times, Mayfield shared his reaction to the post.

“I would say for me, I think I was doing the normal every thing that anybody would do in that situation,” Mayfield said. “The motto is serve and protect. I don’t think it’s by coincidence that service comes first and protection comes later.”

It turns out shortly after the photo was taken, Mayfield came upon another older couple trying to change a flat tire and stepped into help.

“Moments like this really speaks volumes for the type of officers we are looking for,” Sgt. Mercedes Fortune said. “We are hiring and if these type of situations speak to anyone out there who wants to be in law enforcement we want them to find the blue in you.”