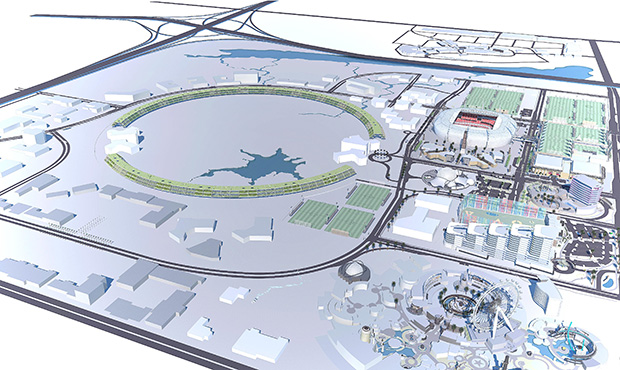 PHOENIX — A new, next-generation sports and entertainment district is being planned for the Scottsdale area in the near future.

The development will be called Akimel 7 and is planned to be built on the northwest and northeast blocks at the Loop 101 and 202 exchange, and will extend north along the east side of Loop 101, totaling 500 acres.

“Our sports district is not just a district around a [sports] stadium. It’s much broader in its reach,” Solanna Group CEO David Fordon said.

“We’ll have everything from extreme sports to UFC. We’re looking at even the possibility of Grand Prix racing in a small circuit like Kuala Lumpur.”

The Solanna Group independently embarked on the design of a multipurpose stadium that could fit their needs: unique office designs, hotels, conference spaces and a center atrium that can be a field of many configurations so if any team ever left, they wouldn’t be stuck with a vacant arena.

Fordon said “just based on bells and whistles” that different costs range anywhere from $100 million to about $650 million. “We wanted to understand the footprints, the dynamics, the infrastructure requirements, so that’s why you’ll see a stadium in a lot of our renderings because we wanted a plan of what could happen from our perspective,” Fordon said. “It’s not just vacant land for any sports team to do what they want with.

Casino Arizona Field, a roughly 7,000-seat soccer-specific stadium, currently resides on the northwest block of Loop 101 and Loop 202, along the east side of McClintock Drive just south of McKellips Road.

Phoenix Rising FC has been the licensee to the stadium since 2017 and will continue to play there through the 2020 season. However, the team’s future home site after this season has yet to be announced.

“With our entertainment and theme park, we decided between sports and entertainment that you’d have a live block with hotels, upscale retail, specialized shopping, offices, amphitheaters,” Fordon said.

“We’re looking at 70% of this as one-of-a-kind uses like movie studios and themed attractions, a sports stadium — there’s only going to be one that’s pro stadium size.

“But you can do a lot of things with doubling the functions of that.”

Fordon added that Akimel 7 could include anywhere from “12 to 16-plus” sports fields and will feature sports medicine such as MRI, musculoskeletal-ultrasound and CT scan equipment.

But the sports district is just one of seven zones in the 500-acre planned area.

There’s an emerging technology zone for robotics and nanotech, an international business world trade zone with import and export capabilities, and an international school. Akimel 7 will also feature a 25-megawatt solar power capacity grid that will serve the district and create a zero-carbon zone.

“That allows us to concentrate a lot of parking in one area, so it allows us to create more open space,” Fordon said. “And with open space, you have fields. The idea is that you can use them for fields or fairs or expos, exhibits, touring exhibits, parks, everything.”

That open space will be used for events such as auto shows, touring exhibits and more. But when unoccupied, it will allow for park areas, a dog park, walking, cycling, nature walk, etc., almost like a miniature Central Park in the middle of the development.

“It’s probably a 10-year range, but over the next two years, we’re planning to build out about 500,000 square feet,” Fordon said. “Between two and five years — 2.5 million square feet. I don’t know if that’s going to include a stadium or not and that’s over a 220-acre parcel.

“On the east side, that’ll probably be a seven-year period, which will probably start three years from now. I think you’re going to see 60-70% built out within 10 years of this whole place.”

The district will be privately funded. No taxpayer money will be used in the development, Fordon said.

“With each project, it’s not like we have the capital under our mattress somewhere,” Fordon said.

“Each project brings their own capital. Now with our partnership with CamCo, we’re in a position to finance projects that are undercapitalized and projects we really like, but generally every project will bring their own capital, so it’s not like a burden for any one person.”

Fordon says there are going to be 30 or 40 projects such as hotels, stadiums, theme parks, robotics facilities, and trade centers, to name a few.

The whole project is estimated to cover 10-12 million square feet and cost around $4 billion. Fordon estimates that the land, infrastructure, superstructure and solar all costs roughly about a half a billion dollars each.

“Again, we’re not the government, we’re on the private side, so everything we did in our model is all privately financed,” Fordon said.

“It’d just be phenomenal for this area to have a great center to bring visitors, locals, everybody alike — that’s one of the stops you have to make when you’re in Phoenix, Akimel 7.”

If you haven’t received a COVID-19 vaccine yet, now’s the time to join many other of your fellow Arizonans who are doing so right now. No one will criticize you; there is no shame. In fact, you’ll be welcomed with smiles and open arms!
Close
Multibillion dollar entertainment, sports district planned near Scottsdale