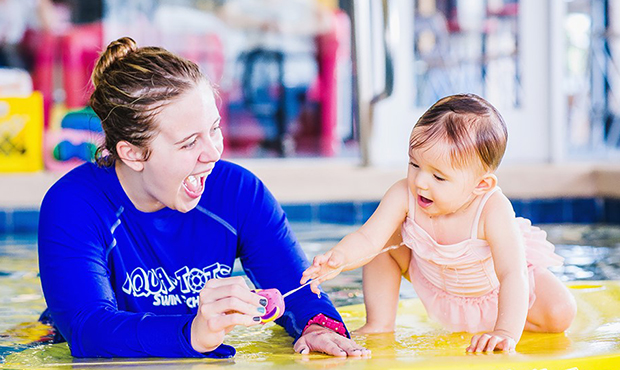 That’s all centered around the Valley.

Aqua-Tots Swim Schools expects its new headquarters, which is being built in Mesa, to be completed this fall.

“Aqua-Tots Swim School has been a great community leader in Mesa for nearly 30 years,” Mayor John Giles said Thursday in a press release. “It is exciting to see a local business grow while providing vital services to children and families.”

The indoor swim school company has expanded internationally since it opened in the Valley in 1991. Aqua-Tots opened its 100th location in McKinney, Texas, in April and operates in 14 countries on three continents.

The company headquarters is under construction on Greenfield Road and Southern Avenue, in the same complex as the original location.

Children as young as four months are allowed to take lessons at the Aqua-Tots Swim Schools.

Drowning is the leading cause of injury-related death in children aged 1-14, according to the Center for Disease Control. It’s the second-leading cause of death of children 1-4 behind only birth defects.

Arizona is no different. At least 25 kids ages 5 and under have died from drowning each year since 2013, according to ChildrenSafetyZone.

“People do everything they can to keep their children safe. They install the safest car seats, they give them healthy food, they take them to doctor for check ups,” Paul Preston, a co-founder of the school, said in the release.

“Why wouldn’t they give them the skills they need to prevent the leading cause of death? And those skills can be learned in swim lessons. We’re here to change these numbers.”