The 7,022-square-foot home has four bedrooms and six bathrooms, according to Zillow.

It includes views of Camelback Mountain, a “resort-style” backyard with a pool and spa and a “palatial” master suite with his and her walk-in closets.

The home was designed by Israeli architect Ilan Pivko and was built by Regal American Homes.

According to public records, the house was built in 2018 and includes five garage stalls.

The Cardinals hired Kingsbury, 39, in January after a disappointing 3-13 season under former coach Steve Wilks, who was fired on New Year’s Eve.

Kingsbury was the head coach of the Texas Tech Red Raiders for six seasons, compiling a 35-40 overall record.

He was the offensive coordinator at the University of Southern California when he interviewed and was hired with the Cardinals. 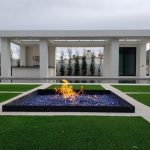