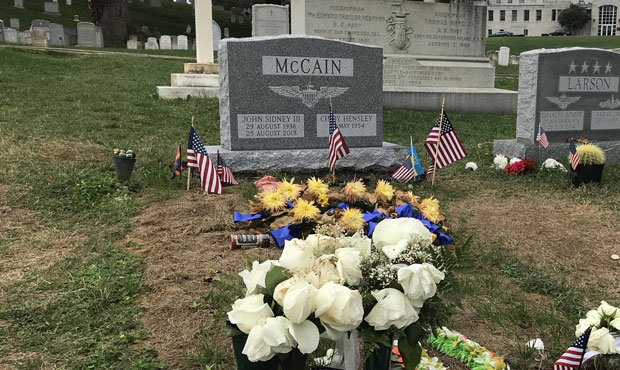 PHOENIX – The headstone at the grave of late Sen. John McCain of Arizona has been put in place.

The U.S. Naval Institute tweeted a photo last week of McCain’s gravesite with the headstone installed at the U.S. Naval Academy Cemetery in Annapolis, Maryland.

The headstone for Sen. John McCain’s grave @NavalAcademy Cemetery has been put in place pic.twitter.com/d5iP6By74B

The post was made Oct. 11, but it wasn’t clear exactly when the headstone had been placed.

The gray headstone has a space on it reserved for McCain’s widow, Cindy. The site was adorned with flowers and American flags.

Following a week of memorials in Arizona and Washington, DC, McCain was laid to rest Sept. 2.

He was buried next to Chuck Larson, who was a Naval admiral and longtime friend of McCain’s.

Larson died in 2014, and McCain wrote in his recent memoir that he wanted to be buried next to his friend, “near where it began.”

On Sunday, McCain’s daughter, Meghan, posted what appeared to be the same photo to her Instagram account with the caption “I miss you the most on Sunday.”

I miss you the most on Sunday.

Before serving in Congress for more than three decades, McCain was a U.S. Navy pilot.

He was a prisoner of war for more than five years after being shot down in Vietnam.

He died Aug. 25 at his home in Cornville, Arizona.

Instead of waiting for a problem to happen, experts suggest getting a head start on your plumbing maintenance.
Close
Headstone installed at John McCain’s grave site at Naval cemetery