Meghan McCain posts another photo of her and Sen. John McCain 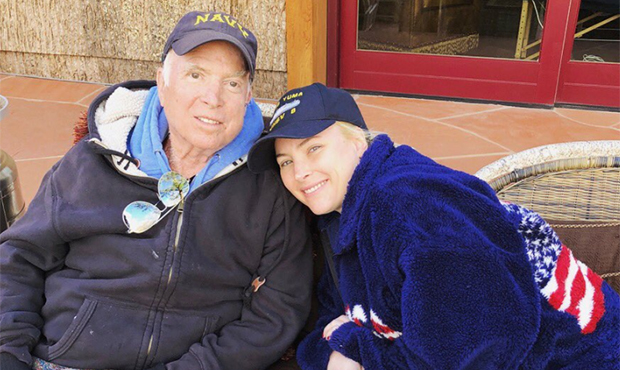 PHOENIX — U.S. Sen. John McCain (R-Ariz.) may not be spotted much in public, but the Arizona Republican can be seen posing for selfies on his family’s social media pages.

His daughter, Meghan McCain, first posted a photo of the pair last month, which was the first time he had been seen since he went home just before the holidays due to a viral infection.

The senator tweeted a photo of him, his wife, Cindy McCain, and Arizona Cardinals receiver Larry Fitzgerald last month when Fitzgerald paid him a visit.

And earlier this month, Cindy posted a silly selfie of her and McCain during a sunny day in Sedona.

On Sunday, Meghan McCain posted another photo of her and her father on Twitter, with the caption “No place I’d rather be.”

In it, McCain was bundled up to avoid the northern Arizona cold and gripping a cup full of what appeared to be ice.

The father-daughter duo spent the weekend in Cornville, Arizona, where the family has owned a cabin for more than three decades.

There have been no official updates on the health of McCain, who has been battling glioblastoma, a rare and aggressive form of brain cancer, but in the photo the senator looked more frail than usual.

The typical survival period after a diagnosis is 12 to 15 months, though a small percentage live longer than five years. McCain was diagnosed last summer.

Doctors found a second tumor in his brain back in November. The discovery came just weeks after McCain tore his Achilles tendon.

Meghan McCain told KTAR News 92.3 FM’s Mac & Gaydos earlier this month that her father was doing well and that she was “cautiously optimistic” about him returning by the summer.

“I wish I had an exact date but I just don’t,” she said. “I am very cautiously optimistic about the summer, yes.”

While there are a variety of ways to prevent clogged drains, it's equally as important to know what to do when you're already too late.
Close
Meghan McCain posts another photo of her and Sen. John McCain