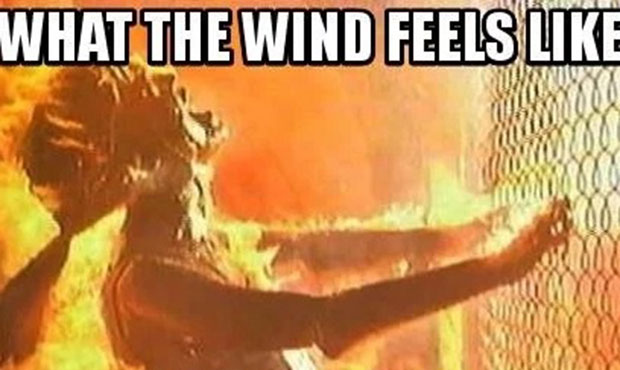 PHOENIX — In case you haven’t heard, it has been brutally hot outside in the Valley.

The Phoenix area was expecting record-tying and record-breaking temperatures this week, getting well up into the 110s and possibly the 120s.

If you’ve ever been through a Phoenix heat wave, you might be familiar with the desire to use an oven mitt while driving or just not leave the house altogether.

Fortunately, some had the good sense to laugh about it. But not too much, because no one needs to be more sweaty than we already are.

Time to get a new thermometer, this one has run out of degrees. Phoenix area, Arizona #heatwave pic.twitter.com/IsOqejemPN

Here are some of our favorite heat-related memes from this week. We’ll comment on them a bit, but we need to get a big glass of ice water first.

The fun started on Twitter, where people referenced classics such as “The Sandlot” and “King of the Hill.”

Greetings from Arizona, where it is currently ten thousand degrees…but hey…at least it's a dry heat… pic.twitter.com/iRGrbdJzvt

But it wasn’t just Twitter that was in on the fun. We found great stuff on a lot of other sites, including Reddit, Pinterest and, weirdly, Google Plus (which we still didn’t know was, like, a thing). (via Shannon Hernandez on Google+) After putting you through all those, you deserve a reward. How about a panda eating a popsicle?

Pool renovations and kitchen upgrades may seem enticing, but at the forefront of these investments arguably should be what residents use the most. In a state where summertime is sweltering, access to a functioning HVAC unit can be critical.
Close
Hilarious memes to get a laugh as Phoenix roasts in a heat wave