PHOENIX — Calling all baseball fans: Some of the rarest baseball cards in the world are now a part of a new exhibit at the Phoenix Art Museum.

The cards on display are part of The Diamondbacks Collection, acquired by the team’s managing general partner Ken Kendrick.

“I began to kind of uncover what I had left behind as a boy and that got me really going as an adult,” Kendrick said.

Kendrick made it his goal to acquire some of the rarest sports cards in the world.

The highly-valued cards are in near mint or mint condition, including rookie cards for Mickey Mantle, Hank Aaron and Sandy Koufax. It also features a Babe Ruth card from 1915 when he was a member of the Boston Red Sox.

Kendrick said the most-prized card of his collection is the 1909-11 T206 Honus Wagner card, the most valuable sports card in the world.

“It is the most identified card in collecting,” Kendrick said. “One of its identifying marks is that it was once owned by Wayne Gretzky.”

Kendrick said he is not done collecting. He needs four more cards to have the entire Professional Sports Authentication’s top 20 list, including a 1954 Ted Williams card and a 1955 Roberto Clemente card.

Baseball fans will really enjoy the exhibit at the Phoenix Art Museum, Kendrick said, moving the exhibit that was at the National Baseball Hall of Fame in Cooperstown for three years.

“It’s the history of our game,” Kendrick said. “This display here is the first time I’ve had it in public here in Arizona.”

The collection will be on display until April 24 at the Phoenix Art Museum. 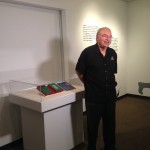