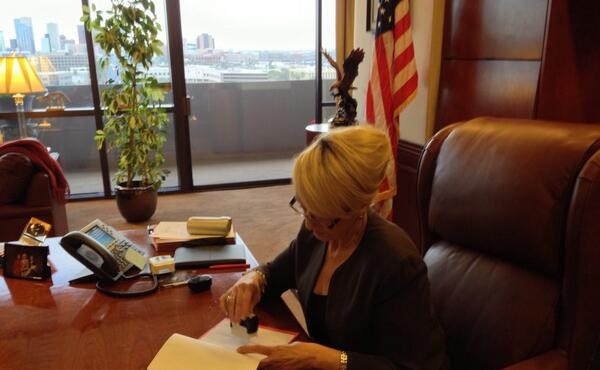 PHOENIX — Arizona Gov. Jan Brewer vetoed Wednesday a controversial bill that would have allowed businesses to deny services to gays and others based on religious beliefs.

Loud cheers erupted outside the Capitol building immediately after Brewer made
her announcement.

“My agenda is to sign into law legislation that advances Arizona,” Brewer
said at a news conference. “I call them like I seem them, despite the cheers or
the boos from the crowd. After weighing all the arguments, I have vetoed Senate
Bill 1062 moments ago.”

The Republican governor said she gave the legislation careful deliberation in
talking to her lawyers, citizens, businesses and lawmakers on both sides of the
debate. Her office said it received more than 40,000 calls and emails on the
legislation, with most of them urging a veto.

Brewer said the bill “could divide Arizona in ways we could not even imagine
and no one would ever want.” The bill was broadly worded and could result in
unintended negative consequences, she added.

Enough lawmakers have said they’re against the bill to make it certain there
will be no override of the governor’s veto.

The bill backed by Republicans in the Legislature was designed to give added
protection from lawsuits to people who assert their religious beliefs in
refusing service to gays. But opponents called it an open attack on gays that
invited discrimination.

The bill thrust Arizona into the national spotlight last week after both
chambers of the state legislature approved it. As the days passed, more and more
groups, politicians and average citizens weighed in against Senate Bill 1062.
Many took to social media to criticize the bill.

The veto of Senate Bill 1062 will likely be met with praise from Arizona’s business community, which called on Brewer to veto it citing potential damage to Arizona’s economy. The Arizona Chamber of Commerce said Monday the bill could hurt tourism, make it hard to recruit new businesses and open the door to lawsuits against businesses.

Companies such as Apple Inc. and American Airlines and politicians including
GOP Sen. John McCain and former Republican presidential nominee Mitt Romney were
among those who urged Brewer to veto the legislation. The Arizona Super Bowl
Host Committee, which is overseeing preparations for the 2015 Super Bowl in
Glendale, Ariz., came out with a statement against the legislation. The Hispanic
National Bar Association on Wednesday said it cancelled its 2015 convention in
Phoenix over the legislation.

Brewer was under intense pressure to veto the bill, including from . They said in a letter to
Brewer that while the intent of their vote “was to create a shield for all
citizens’ religious liberties, the bill has been mischaracterized by its
opponents as a sword for religious intolerance.”

On Wednesday, it was reported that the NFL was considering moving the 2015 Super Bowl away from Arizona amid concerns over the bill.

A Scottsdale lawyer said the bill would be bad for taxpayers, as it could have led to numerous lawsuits.

“For example, a taxi cab driver who may be Muslim may refuse to give service to a woman who may be traveling without a male companion, in violation of their religious law,” Scottsdale attorney Jon Frutkin said.

“As it exists now, that cab driver can’t discriminate against that passenger, and perhaps after 1062, you’re going to have a bunch of court cases that will cost taxpayers a lot of money to find out whether or not it allows for discrimination on other protected classes.”

The Center for Arizona Policy, which helped draft the bill, said the bill is not anti-gay and is instead designed to protect people of faith who are being persecuted by judges. They also argued it was needed to
protect against increasingly activist federal courts and simply clarifies
existing state law.

“It is truly a disappointing day in our state and nation when lies and
personal attacks can over shadow the truth,” said Cathi Herrod, the leader of
the group.

Sen. Al Melvin, a Republican who is running for governor and voted for the
bill, said he is disappointed by the veto.

“I am sorry to hear that Gov. Brewer has vetoed this bill. I’m sure it was
a difficult choice for her, but it is a sad day when protecting liberty is
considered controversial,” Melvin said.

Democrats said it was a veiled attempt to legally discriminate against gay
people and could allow people to break nearly any law and cite religious freedom
as a defense.

Rep. Ruben Gallego, D-Phoenix, said would remain vigilant of other legislation
that could also target gays.

“The effect is that again we got a black eye,” Gallego said. “But it also
shows that Arizona can stand united.”

Democratic leaders in the legislature thanked the governor for vetoing the
bill, but they said it should not have ever made it to her desk.

“It’s time to move Arizona forward and make sure that something like Senate
Bill 1062 never happens again,” Senate Minority Leader Anna Tovar said. “It’s
time to show the nation and the world what Arizona is truly about.”

In the days leading up to the decision there were protests and the bill was the focus of national attention.

A New York Times story said the governor’s office had gotten more than 100,000 responses regarding the bill by Monday morning.

Similar religious-protection legislation has been introduced in Ohio,
Mississippi, Idaho, South Dakota, Tennessee and Oklahoma, but Arizona’s plan is
the only one that has been passed by a state legislature. The legislation was
withdrawn in Ohio on Wednesday, and similar bills are stalled in Idaho and
Kansas.

The push in Arizona comes as an increasing number of conservative states
grapple with ways to counter the growing legality of gay marriage. Arizona has a
ban on gay marriage.

Federal judges have recently struck down those bans in Utah, Oklahoma and
Virginia, but those decisions are under appeal.

On Wednesday, a federal judge declared Texas’ ban on gay marriage
unconstitutional, but he left it in place until an appeals court can rule on the
case.