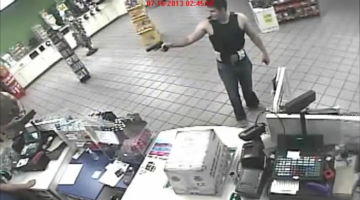 PHOENIX — A Tucson police officer was charged with two counts of aggravated assault after an altercation at a Pima County gas station.

On July 16 at about 3 a.m., authorities received a call about a man pointing a gun at a gas station attendant.

The clerk at the Giant Gas Station told officers that McCartin and an unidentified man entered the store wearing bulletproof vests and appeared intoxicated.

During a sales transaction, McCartin pulled out a handgun and pointed it at the sales clerk. The second man then told McCartin to put down the gun, but McCartin refused and pointed the gun at the clerk a second time.

The two men left the scene on foot before authorities could arrive.

Detectives performed a search of the area and an investigation of the situation. Neither man demanded anything during the exchange.

McCartin was booked into the Pima County Adult Detention Center and charged with two counts of aggravated assault.

Below is a video of the alleged assault from the gas station security tapes.

Sports betting in Arizona opened a new world to young adults, one where putting down money on games was as easy as sending a text message.
Close
Tuscon police officer charged with aggravated assault