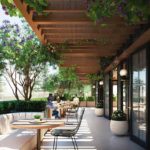 PHOENIX – When The Global Ambassador luxury hotel opens in Phoenix next year, it will be topped off with a taste of the Mediterranean.

Valley restaurateur and developer Sam Fox announced Wednesday that Theà Mediterranean Rooftop will be one of five original restaurants at his first hotel project.

The other dining options are a Parisian brasserie, a casual French market and bistro, a poolside Mexican/Peruvian restaurant and a private members club.

The Global Ambassador is under construction at The Grove mixed-use development at 44th Street and Camelback Road and is expected to open in late 2023.

Theà will overlook Camelback Mountain and have a menu that features shareable plates of pasta, dips, seafood, flatbreads, vegetables and marinated protein skewers. The venue will also have a curated cocktail program.

“Italy, France and Greece have served as the settings for some of the best meals of my life and I not only want to capture the bright and bold flavors of the Mediterranean, but also the memories made there, which are almost always accentuated by lively music, communal gatherings with family and friends and being encapsulated in stunning surroundings,” Fox said in a press release Wednesday.

Fox also announced that Eric Kim Haugen will serve as head of culinary creative for The Global Ambassador. Haugen has appeared on Food Network’s “Iron Chef America” and is a judge on the channel’s “Big Restaurant Bet.”

“As my first venture in Arizona, I’m inspired by the tight-knit community of chefs and restaurateurs who are supportive of one another, but also have suppliers and craftspeople who are sourcing incredible products and goods,” Haugen said in the release.

“I love how diverse and interesting the food scene is in the Phoenix area and that the community has a very high dining IQ — they understand delicious food.”