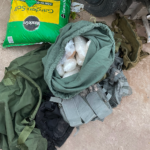 The Arizona Department of Public Safety said in a press release Wednesday that Francisco F. Abril, 34, and Gloria A. Ortiz, 43, were booked into Pima County Jail following the Oct. 29 bust.

Detectives said they hauled in eight rifles, including one with a silencer and two scoped rifles; a 1 MAC-11 (machine pistol) with a suppressor, six shotguns and seven semiautomatic pistols; 80 magazines that included multiple 30-round mags; 7,153 rounds of ammo; six smoke grenades; three bulletproof vests and a battering ram.

While there are a variety of ways to prevent clogged drains, it's equally as important to know what to do when you're already too late.
Close
Arizona DPS bust nets drugs, high-powered weapons from Tucson home