PHOENIX – Electronic surveillance was involved in eight of the nine arrests state troopers made over the weekend at or near abortion rights protests at the Arizona Capitol, according to court documents.

And for each case involving electronic surveillance, the court determined the arresting officers didn’t establish probable cause when documenting the incidents.

As a result, those detainees were released without conditions after their initial appearance hearings, which took place the morning after their arrests. That doesn’t mean the cases were dismissed, however. It’s up to prosecutors to decide if charges should be pursued, not the court.

The Arizona Department of Public Safety arrested four people who attended the protests on Saturday and five more on Sunday. Troopers used teargas to break up Friday’s protest against the U.S. Supreme Court’s reversal of Roe v. Wade but didn’t take anybody into custody.

Four women, ages 19-20, were arrested Sunday night and accused of being uncooperative after troopers stopped them for allegedly crossing a side street outside a crosswalk a few blocks from the Capitol.

According to the probable cause statements, troopers monitoring the scene via closed circuit television surveillance cameras observed the women crossing outside a crosswalk at 18th and Madison avenues around 11:30 p.m. They notified troopers on the ground, who contacted the group.

Those troopers said the women were noncompliant and booked them into jail for failure to show identification. One of the women was also accused of resisting arrest.

Maricopa County Superior Court Commissioner Jane McLaughlin said she didn’t find probable cause based on the Form IV documentation, which includes the probable cause statements, that DPS submitted to the court in the four cases.

The Maricopa County website defines “probable cause” as meaning “that a reasonable person would believe that a crime was in the process of being committed, had been committed, or was going to be committed.”

McLaughlin wrote the following on each of the women’s release orders: “Form IV does not establish probable cause to find that the Defendant crossed outside a marked crosswalk ‘[b]etween adjacent intersections at which traffic control signals are in operation,’ as required by A.R.S. 28- 793(C).”

For the woman accused of resisting arrest, she added: “The Court further finds that probable cause for the resisting arrest allegations has been sufficiently rebutted by the defense for purposes of this hearing.”

McLaughlin didn’t elaborate on why she didn’t find probable cause in three of the release orders from Saturday’s arrests. But for the 19-year-old man, she wrote, “Form IV fails to adequately establish identification of Defendant and his participation in alleged offense conduct.”

In the only weekend arrest where McLaughlin didn’t say probable cause wasn’t established, an 18-year-old man was booked for criminal damage after allegedly spraying paint Sunday night on the sidewalk and a bench at Wesley Bolin Plaza. According to the probable cause statement, a trooper witnessed the vandalism before arresting the man.

He was released on his own recognizance with certain conditions, including that he can’t return to the Capitol, can’t contact the arresting officers and can’t possess drugs without a valid prescription or consume alcohol. 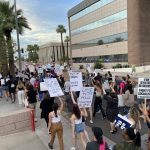 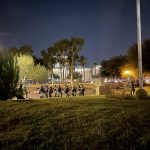 So, your little one starts kindergarten soon. How exciting! You still have a few months before the school year starts, so now’s the time to make sure students-to-be have the vaccines needed to stay safe as they head into a new chapter of life.
Close
Electronic surveillance used in 8 Phoenix abortion protest arrests; court doesn’t find probable cause