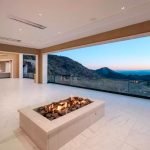 PHOENIX – A newly built Scottsdale mountainside estate is being offered for nearly $30 million, a price that would shatter the Arizona record for most expensive home sale.

The opulent 21,150-square-foot residence has eight bedrooms and 18 bathrooms (12 full, six half) and sits on about 4.6 acres in the prestigious Summit at Silverleaf community in northeast Scottsdale.

The three-level layout, including a guest casita and separate “in-law” quarters, was designed by Dale Gardon and built by Mast Luxury Homes. Construction was completed in 2021, and it was listed in February for $29.5 million.

The estate boasts a covered tower that provides breathtaking views of the city and desert landscape, along with an infinity pool on the edge of a resort-like deck.

Other luxurious elements include an elevator, an exercise room with a steam shower, a yoga/art room, a home theater and a 12-car garage.

If the house sells for within a few million of the asking price, it would surpass the state record for a single-family home of $24.1 million paid for a 15,534-square-foot Silverleaf property in October 2020.

So, your little one starts kindergarten soon. How exciting! You still have a few months before the school year starts, so now’s the time to make sure students-to-be have the vaccines needed to stay safe as they head into a new chapter of life.
Close
Opulent new Scottsdale estate listed with asking price of nearly $30M