Suspect showed his face during armed robbery in Phoenix This armed robber may have made a critical mistake.

Phoenix Police Detective Kimberly Bates said a man wearing a bandana over his face walked into the Circle K at 67th Avenue and McDowell Road.

“He was carrying a black revolver and ordered the clerk to give him the cash from the register,” she said. 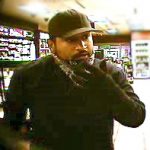 He appeared to have knowledge about how the safe worked. He grabbed the cash and as he was fleeing the store, he pulled the bandana down right in front of the surveillance camera.

Next, a horrific headline-making news story that happened June 9, 2014, in a desert area of Surprise.

A stolen pickup truck was found on fire near 219th Avenue and West Sun Valley Parkway. In the truck, the bodies of 41-year-old Billy Kling, 57-year-old Lisa Baker and 25-year-old Garth Tuggle, who had all been shot.

We don’t know much about Billy and Lisa, but have learned a little about Garth.

“He was born and raised in Arizona and, according to his father, was an avid artist and loved to paint,” Bates said.

“He was getting quite a following for his paintings and was just starting to sell some of them.”

It still isn’t clear how the three knew each other so any information about their connection would also be helpful to investigators. Picking which streaming services to subscribe to are difficult choices, and there is no room for internet that cannot handle increased demands.
Close
Suspect showed his face during armed robbery in Phoenix