For Taiwan’s Olympics team, everything is in a name 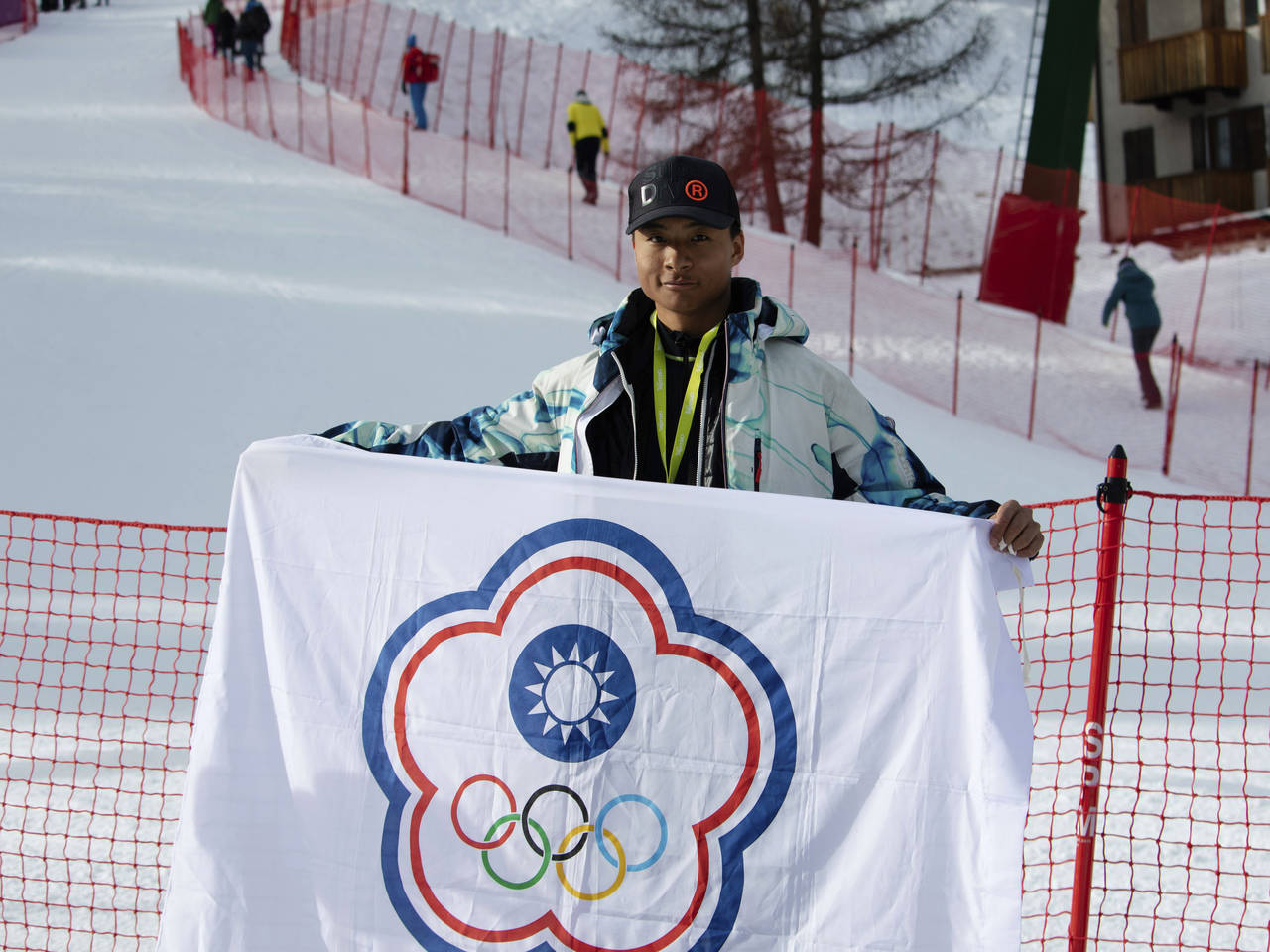 In this photo provided by Szollos Peter, Ray Ho is holds a flag in Italy on Feb. 26, 2019, created to represent Chinese Taipei, the name under which Taiwan competes under in international sporting competitions. Under an agreement struck by the Taiwan government and the IOC in 1981 they compete under the name and flag of Chinese Taipei after a referendum to change their name to Taiwan failed in 2018. (Szollos Peter via AP)

TAIPEI, Taiwan (AP) — For Taiwan, every appearance on the global stage is fraught with politics — and even more so when that stage is China.

The four Taiwanese athletes competing in Beijing at the Winter Olympics, which open Friday, can’t use Taiwan’s flag. They have long competed under a name — Chinese Taipei — that is rarely used and was forced on the team by a geopolitical divide that predates the Cold War.

Maggie Lee, a 19-year-old slalom skier, found herself giving people an impromptu lesson in the name as she traveled across Europe for training and competitions ahead of the Olympics.

“When I’m meeting people, I’ll tell them I’m from Taiwan, because if you tell people you’re from Chinese Taipei, nobody knows where you’re from, you can’t find it on Google,” she said.

Taiwan is an island of 24 million people off China’s east coast. It functions in many ways like a country with its own government and military. But China claims Taiwan as its territory, and only 14 countries recognize Taiwan as a nation. Most of the world, including the United States, have official ties with China instead.

The divide was born of a civil war in the late 1940s in which the Communists toppled the Republic of China’s government and founded the People’s Republic of China that rules to this day. China’s former Nationalist leaders fled to Taiwan and set up a rival government in the city of Taipei.

Both claimed to represent China, and the U.S. among others sided with the government in Taipei. But a growing number of countries shifted to Beijing over the next two decades. The U.N. switched in 1971, forcing Taipei out of the organization. U.S. President Richard Nixon visited China the next year and the United States established ties with Beijing in 1979.

The name issue surfaced at the 1980 Olympics in Lake Placid, New York. Taiwanese athletes had competed as the Republic of China in the previous two Winter Games, under its red flag with a white sun on a blue rectangle in one corner.

It was communist China’s first time at the Olympics, and the government successfully protested the island’s participation under the Republic of China, Taiwan’s formal name. The athletes got the bad news after arriving in Lake Placid, said Thomas Liang, a cross-country skier who competed in the 1972 and 1976 Games.

“We all went to the U.S., but they wouldn’t let us on the playing field,” he said. “I was sad because I couldn’t compete. Losing this opportunity was such a shame.”

The next time Liang went to the Olympics, he was a coach, and his team was known as Chinese Taipei.

A 1981 agreement with the International Olympics Committee created the name and allowed athletes to compete under a newly designed white flag with a flower outline around a sun and the Olympic rings in the middle. A flag-raising song is played at medal ceremonies instead of the anthem.

In the decades since, a Taiwanese identity distinct from China has grown stronger, even as the island developed close economic ties with the mainland. The share of the population identifying as Taiwanese has risen to 62%, up from 48% in 2008, according to an annual survey by National Chengchi University in Taipei. Thirty-two percent of the islanders identify themselves as both Chinese and Taiwanese, while 3% say they’re Chinese.

Under President Tsai Ing-wen, who took office in 2016, Taiwan has sought to shore up its de facto position, while stopping short of declaring formal independence, a move that could spark a Chinese military invasion.

China has responded by sending warplanes on training missions toward Taiwan and cajoling other countries to break their ties with the island. It has also pressured airlines, hotels, luxury brands and others doing business in China to label Taiwan as a province of China online and in maps.

But not everyone was satisfied with the status quo. In 2018, former Olympian Cheng Chi launched a national referendum to change the team’s name to Taiwan for last year’s Tokyo Olympics.

“Is our country’s name Chinese Taipei? Of course not,” Cheng said in an interview with the Liberty Times newspaper in 2018. “In the past, we accepted that one moment of injustice to ensure the fulfillment of a lifetime of striving.”

The vote failed after many athletes came out against it, worried that the change could result in them being blocked from competing. Many say they just want to focus on the competition, and not the politics.

The name doesn’t bother Lee, the skier. “As long as we are clear on who we are, that’s enough,” she said.

At the Winter Olympics this week, the two skiers representing Taiwan say their focus is on doing their best, and that would serve their home better rather than political statements.

“I don’t have the right to deal with this issue, as an athlete,” said Ray Ho, the other skier representing Taiwan. “I can only do what is within my ability, which is to train and compete.” Annuities aren’t really a secret, but they are so misunderstood that they might as well be. Once you understand what an annuity is and how it can benefit you, you could decide this “secret” is the perfect supplement to your retirement plan.
Close
For Taiwan’s Olympics team, everything is in a name