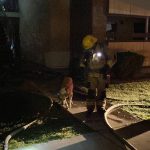 The Phoenix Fire Department said the blaze at 19th Avenue close to Thunderbird Road displaced 16 people and a dog.

Crews had just finished putting out a fire at a nearby mobile home park when they were sent to the apartment complex around 9 p.m.

The fire spread to the attic space of two more second-story apartments; four downstairs units were damaged by smoke and water.

Sports teams in Arizona have seen their fair share of instant classic games, but there's a few that every fan needs to know.
Close
Fire whips through 2 apartments in Phoenix; 16 displaced