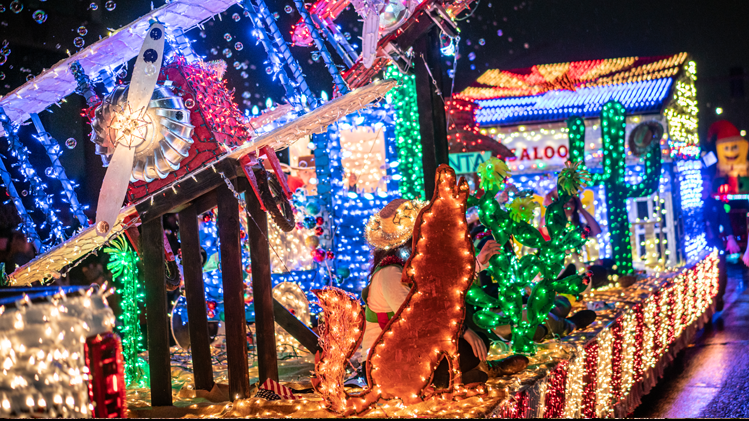 PHOENIX — The holiday spirit will be lighting up the night sky during the annual APS Electric Light Parade in central Phoenix on Saturday.

The holiday favorite will feature entries displaying hundreds of lights on Dec. 4.

The theme for this year’s edition of the parade is “Peace on Earth.”

The 2.3-mile parade route begins at 7 p.m. at Central and Montebello Avenues before traveling south to Central Avenue and Camelback Road. It’ll head east along Camelback to Seventh Street and continue south until its conclusion at Indian School Road.

Road closures will occur from 5 p.m. to 11 p.m. at Central Avenue from Camelback to Bethany Home roads, Seventh Street from Indian School to Osborn roads, and Camelback Road from First Avenue to Seventh Street.

Event organizers have implemented a few COVID-19 mitigation strategies, which include reduced entries, reduced entry occupants and the cancellation of the pre-parade viewing event that was traditionally held the night before the parade.

Spectators are encouraged to bring blankets and chairs for seating, and are advised to arrive early as crowds have previously arrived three or more hours before the start to reserve their spot.

Coolers are allowed, however, alcohol and glass containers are prohibited.

ABC15 will broadcast the parade on its Facebook page and website at 4 p.m. on Dec. 5 and at 6 a.m. on Christmas Day.

One of the most exciting elements of the MLB offseason is the Arizona Fall League, which began its 30th season Monday.
Close
Electric Light Parade returns to central Phoenix on Saturday