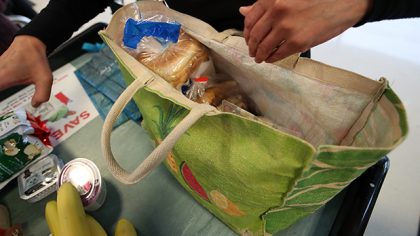 BY GENESIS SANDOVAL I CRONKITE NEWS

PHOENIX — More than 900,000 Arizona food stamp recipients saw an increase in their monthly benefits starting Friday, but activists say much more needs to be done to fight food insecurity in the state.

The increase in Supplemental Nutrition Assistance Program benefits is the result of officials recalculating the Thrifty Food Plan, a federal estimate of how much a family needs to afford a basic, healthy diet.

But SNAP recipients will not see the full 21% increase in the Thrifty Food Plan benefits in their pocketbooks, because it comes at the same time that a 15% pandemic-related boost in benefits is scheduled to end. The bottom line is that average recipient will see between $12 and $16 extra per month, for now, according to U.S. Department of Agriculture estimates.

Even that could disappear when states start cutting off the “emergency allotment,” another program aimed at helping people with food purchases during the pandemic. The final benefit will be more than recipients had been getting before, but less than they were receiving at the height of the pandemic.

“This increase is extremely meaningful and it’s making up for lost time and lost opportunities, but it won’t get SNAP households where they need to be,” said Ellen Vollinger, legal director of the Food Research and Action Center. “There’s other things going on that, when the 15% increase goes away, it will be very problematic.”

In Arizona, Jessie Gruner, director of community innovations for Pinnacle Prevention, welcomed the increase in SNAP benefits as long overdue, but said “we have to learn how to communicate to the community why they’re seeing a decrease in benefits,” given the back-and-forth in benefits.

“If we’re just comparing it to pre-pandemic, it is a significant increase, but ultimately families that are participating in SNAP are experiencing a loss,” said Gruner, whose organization describes itself as a Arizona nonprofit “dedicated to growing healthy families and communities.”

The Thrifty Food Plan uses a “market basket” approach to determine the types of foods and their cost to “support a healthy diet through nutritious meals and snacks at home” on a limited budget. The amount, which is used to set SNAP benefits, is adjusted monthly to reflect inflation but this is the first time since 2006 – and only the third time in the program’s 46-year history – that the baseline amount has been recalculated.

“The Thrifty Food Plan is presuming that even on a low-cost package, it’s still enough money to have a basic diet,” Vollinger said. “But unfortunately over the decades, that market basket hasn’t been reflecting reality.”

Vollinger said the latest change is “the first reevaluation of the plan that takes a fresh look at everything. It’s making up for decades where things were held steady and not keeping up with the times.”

According to the USDA, the average monthly SNAP benefit before the pandemic was $121 per person. The changes to the Thrifty Food Plan would boost that to $169 per person after all the pandemic assistance ends – a sizeable increase, but well below the $251 per person monthly average projected for October, while some pandemic aid is still in place.

The USDA estimates that the new plan will result in a $19.7 billion increase in SNAP payments nationally in fiscal 2022, which starts Friday. Arizona benefits are expected to rise $388 million next year, to a total of $1.8 billion.

While those numbers sound impressive, advocates say they don’t go far when stretched over 365 days and spread among the 917,398 people who were getting SNAP benefits in Arizona in June, the latest month for which figures are available.

“We have a rising cost of living, a housing crisis in Arizona, we see families have to make decisions about medications over food,” Gruner said. “In juxtaposition with those things, it’s not going to be enough. It’s still going to be tough for families to live with this increase.”

The USDA released a study in June that found that 61% of SNAP participants reported the biggest barrier to a healthy diet was the affordability of healthy food. That challenge will only grow, advocates say, once the other part of the pandemic assistance, the emergency allotment, goes away.

“It’s a welcome step in the right direction, but it will not be enough to meet all of the challenges we see,” Gruner said of the Thrifty Food Plan boost. “This is a small piece, and it likely won’t have a huge, significant impact.”

Vollinger said one solution would be for the USDA to abandon the Thrifty Food Plan – the lowest-cost of four plans the department evaluates – and using the next-highest plan, the Low-Cost Food Plan, as the benchmark.

“We’ve been calling for this for years. There’s no reason for policymakers not to do it, and they should do it,” she said.

Vollinger said that it is “already hard for SNAP-benefits families” to get by, and she wonders if many will even notice the change.

“At the end of the day all that matters is how much is on their EBT card, and how far that amount will stretch,” she said.

Autumn in Arizona brings the beauty of color-changing leaves and a relief from summer heat. It’s one of the most pleasant times to explore the outdoors, especially on a motorcycle.
Close
Rise in food-stamp benefits partly undercut by end to pandemic aid