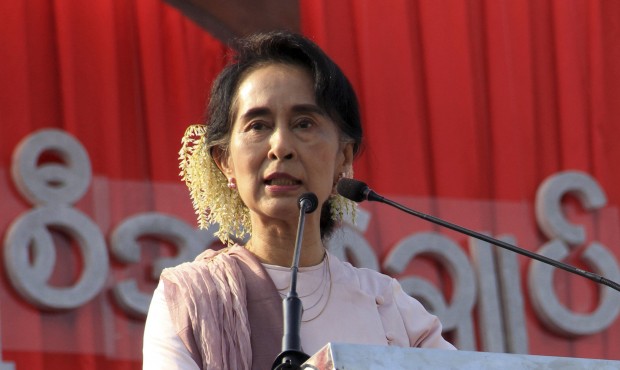 In this Saturday, Jan. 10, 2015 photo, Myanmar's opposition leader Aung San Suu Kyi speaks at the opening ceremony of fund raising concert of 4th anniversary of education network of her National League for Democracy party in Yangon, Myanmar. The Dalai Lama has urged Suu Kyi, a fellow Nobel Peace Prize laureate, to speak out to protect Myanmar's persecuted Rohingya Muslims. The Dalai Lama, the spiritual leader of Tibetan Buddhists, told The Australian newspaper that he has discussed the issue with Suu Kyi twice. Thousands of Rohingya have fled Myanmar, where they have faced violence from the Buddhist majority. (AP Photo/Khin Maung Win)
(AP Photo/Khin Maung Win)
Share

The Dalai Lama, the spiritual leader of Tibetan Buddhists, told The Australian newspaper that the world cannot ignore the plight of the more than 3,000 desperate migrants who have landed on the shores of Indonesia, Malaysia and Thailand in recent weeks, often abandoned by human traffickers or freed after their families paid ransoms.

“It’s not sufficient to say: ‘How to help these people?'” the newspaper quoted him as saying in an interview in the Indian hill town where he lives in exile. “This is not sufficient. There’s something wrong with humanity’s way of thinking. Ultimately we are lacking concern for others’ lives, others’ wellbeing.”

The refugees are a mixture of poor Bangladeshis in search of work and Rohingya Muslims fleeing widespread persecution from Myanmar’s Buddhist majority. The Dalai Lama said he had discussed the Rohingya in earlier meetings with Suu Kyi.

“I mentioned about this problem and she told me she found some difficulties, that things were not simple but very complicated,” he was quoted as saying. “But in spite of that I feel she can do something.”

Suu Kyi became an international hero during her years of house arrest for speaking out against the generals who long ruled Myanmar. She entered politics after her 2010 release, when the junta handed over power to a nominally civilian government.

In a predominantly Buddhist country where there is much animosity toward the Rohingya Muslims, she has remained silent about their persecution.

She now says she never sought to be a human rights champion. Critics say that defending the Rohingya could cost her support if she runs for president.

Instead of waiting for a problem to happen, experts suggest getting a head start on your plumbing maintenance.
Close
Dalai Lama urges Aung San Suu Kyi to help Rohingya Muslims