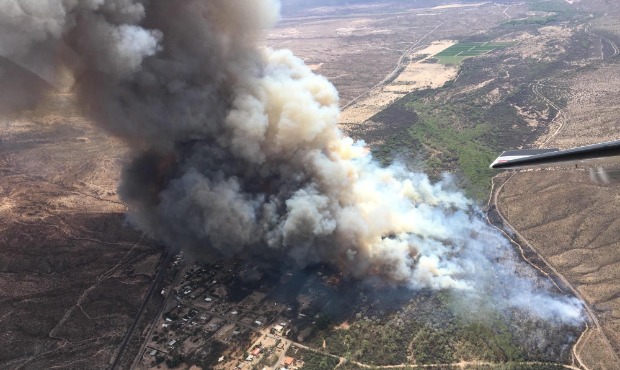 PHOENIX – Forward progress has been stopped on a wildfire in Dudleyville in Pinal County but evacuation orders remain in effect as of Thursday night, authorities said.

The blaze, known as the Margo Fire, increased to 500 acres but was 20% contained, authorities said just before 9 p.m.

The area west of Nopal Drive was in imminent danger per the evacuation alert, which was issued just after noon.

Pinal County Sheriff’s officials said 74 structures were within the evacuation zone with 243 residents living in that area.

As of an update around 5 p.m. Thursday, 12 structures have been destroyed.

Aircraft and ground crews are working toward full suppression with 75 to 100 personnel assigned.

An emergency shelter was opened at Ray High School in Kearny

Dudleyville is a census-designated place with a population of about 1,000 located off Highway 77 about 60 miles north of Tucson.

The mining town was the site of a July 2017 wildfire that charred almost 1,200 acres and destroyed several structures, including homes.

With drought conditions across the Arizona, experts have been concerned about the potential for a busy wildfire season.