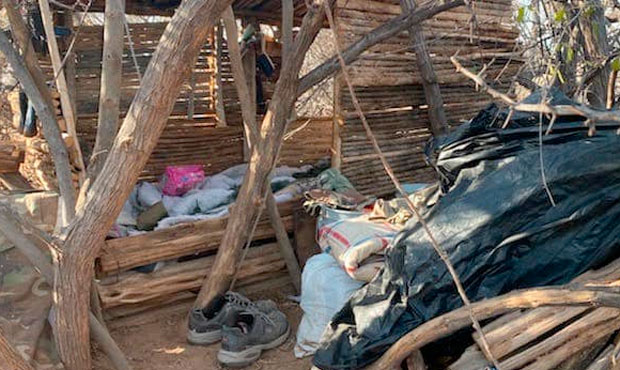 Deputies aided by Border Patrol agents and state police arrested Marana-area resident David Whitaker on Monday after finding him living in a shack he had constructed, the Pinal County Sheriff’s Office said.

Whitaker was at large since Nov. 28 when deputies received a report of his alleged sexual contact with a 13-year-old girl. Whitaker had left his home before deputies got there, the office said in a statement.

Deputies immediately began searching and conducting surveillance operations for Whitaker who was described to them as a survivalist who could live off the grid, the office said.

In March, a state Department of Public Safety detective obtained information on Whitaker’s possible location and he then was observed through binoculars, the office said.

Law enforcement personnel surrounded the area with the help of a Border Patrol plane, and Whitaker as found in the shack, the office said.

Whitaker survived by catching fish from a nearby canal and hunting javelina and rabbits, the office said.

“We are hopeful his arrest brings the victim and the victim’s family some peace of mind,” Sheriff Mark Lamb said.

Whitaker was arrested on suspicion of sexual abuse, sexual conduct with a minor and indecent exposure, the Casa Grande Dispatch reported.

He remained in jail Friday. Online court records didn’t show a defense lawyer for Whitaker who could comment on the allegations against him. After more than two years of battle with an invisible killer, we can now vaccinate the youngest among us against COVID-19. This is great news.
Close
Arizona sex abuse suspect arrested after hiding in desert for months