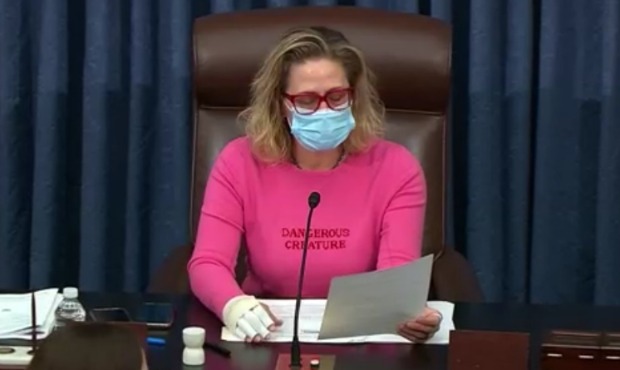 PHOENIX — U.S. Sen. Kyrsten Sinema of Arizona is known for her nontraditional fashion choices and she unveiled another one Tuesday.

Sinema donned a pink sweater with the words “dangerous creature” while presiding over the Senate.

The reasoning for the sweater wasn’t immediately clear, but her position in the Senate has shifted in the last month.

Sinema is among a handful of moderate Democrats in the Senate who have gained influence since Joe Biden became president.

Sinema has called for more targeted aid for Americans, and she, along with six other centrist Democrats and seven Republicans, all signed onto an amendment barring “upper-income taxpayers” from being eligible to receive stimulus checks.

Sinema also opposes Biden’s proposal to increase the minimum wage to $15 an hour, likely ensuring that it’s removed from the final COVID-19 bill even if the Senate parliamentarian rules it can be included.

The Democrat has also drawn the ire of progressives for her refusal to support eliminating the 60-vote threshold for approving most legislation, with one progressive group threatening to recruit primary challengers to oppose them.

Moderates such as Sinema are certain to influence the Biden administration’s next big legislative push as well, a major infrastructure and jobs bill that will include climate planks.