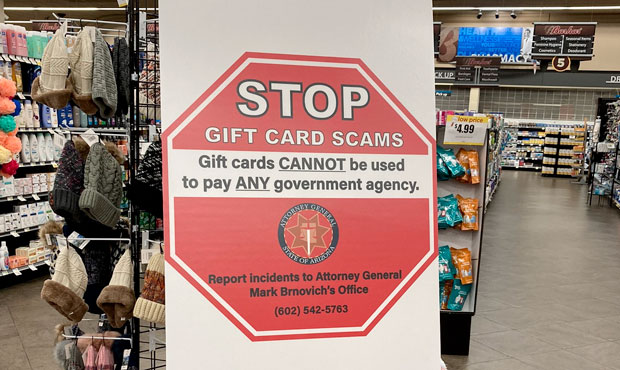 Nearly 1,000 Arizona grocery and convenience stores that are part of the alliance will now have signs by the gift card kiosks with a warning saying cards cannot be used to pay a government agency.

The stop sign-shaped warnings were created due to the growing amount of scammers posing as government officials and asking people to pay off their debt or balance with gift cards.

Some scammers even threaten arrest or to drop government benefits or services if the debt is not paid immediately, according to a press release.

“I am proud to work alongside AFMA and hundreds of stores to protect Arizonans from scammers,” Attorney General Mark Brnovich said in the release. “This program is a great example of the government partnering with the private sector to prevent consumer fraud.”

If you have paid a scammer with a gift card, you can file a consumer complaint with the Attorney General’s Office.