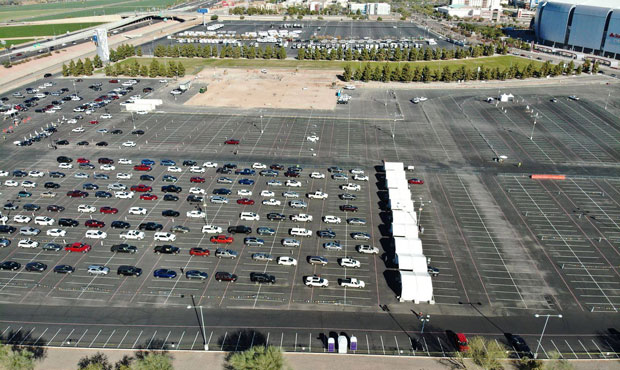 The vaccination site in Glendale administered its 100,000 COVID-19 dose on Jan. 30, less than three weeks after opening, with nearly one in six vaccinations in the state occurring in the stadium’s parking lot at the time.

“We’re proud to have reached this milestone so quickly, but there is much more work to be done,”  Dr. Cara Christ, director of the Arizona Department of Health Services, said in a press release announcing the milestone.

“Our only limitation is the amount of vaccine we have been allocated. As we get more doses into Arizona, we can replicate this nationally recognized model in even more places around the state.”

Health officials at State Farm Stadium on Feb. 1 began administering second doses to those vaccinated in January, according to the release, while administering just as many first doses.

More appointments will be added as the state receives more vaccines.

Those in the Phase 1A and prioritized Phase 1B groups are receiving vaccinations at State Farm Stadium.

The state-run sites recently lowered the age of eligibility from 75 to 65, opening up opportunities for more than 750,000 Arizonans, the state health department confirmed.

Gov. Doug Ducey and Christ requested an emergency infusion of 300,000 COVID-19 vaccine doses and an increase of 300,000 doses weekly from the state’s federal allotment, a request Ducey says was denied.

Ducey said the sites at State Farm Stadium and Phoenix Municipal Stadium are both operating below capacity due to the allocation of vaccines from federal partners.

A $1 million grant from the Ben and Catherine Ivy Foundation helped make the stadium site possible, according to a press release. The Cardinals, Blue Cross Blue Shield of Arizona, Arizona State University and the Arizona Department of Emergency and Military Affairs aided in the effort to open and operate the stadium vaccine site.