PHOENIX – A home known in metro Phoenix as the “Wedding Cake” was severely damaged by fire early Tuesday.

Rural Metro Fire said in a social media post that containing the blaze of the three-story house on Stage Coach Pass in Carefree near the Carefree Highway took crews from two cities.

The 6,000 square-foot house was empty – it was under renovation.

Crews from Cave Creek and Carefree made their way across steep terrain in darkness to reach the house.

The house, built in 1986, last sold in 2019 for $1.18 million, according to Maricopa County tax records, which listed Edward and Karen Carmines as owners. 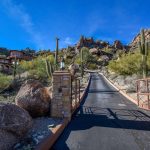 The holiday season may be the most wonderful time of the year, but it’s also the most dangerous time of the year to be driving. That’s why it’s important to remember to call Sweet James Accident Attorneys if you’re injured or arrested because of a DUI accident.
Close
Fire tears through iconic Phoenix-area ‘Wedding Cake’ house